Modify the MIT Coffee Can Radar

The MIT Coffee Can Radar has introduced the study of radar, electromagnetics, RF/analog design, and signal processing to hundreds of curious students, hackers, and veteran engineers. It is used in both private, government labs, turned into full semester courses at other universities, and has even been featured on Mongolian National Television.

We will use this radar to directly image a 2.4 GHz microwave field emitted from its own transmitter.

The radar will be configured to show the time-varying 2.4 GHz field as if time is standing still. To do this we configure the radar to work in Doppler mode. This radar is unique in that you can DC couple the output of its front-end frequency mixer, thereby creating what is sometimes called a ‘micro Doppler’ measurement device. With this the output of the frequency mixer is a voltage proportional to phase and amplitude of the scattered signal from whatever radar target the radar is pointed at. If you stand in front of the radar in this mode and walk towards it and away from it you will see a slowly time varying waveform directly proportional to where you are standing.

To visualize wireless radiation, I’ve modified the op-amp circuit on the output of this mixer so that it can feed a pair of LEDs, one red and one green. These are wired opposite polarity. I then un-mounted the receiver cantenna, attached an extension microwave cable, and taped the LEDs (with extension wires) to the top of the can. With this new antenna assembly I can freely walk the receiver antenna around my lab with the LEDs attached to it providing me an optical indication of phase and amplitude of the transmitted carrier.

When you move the receive cantenna around in front of the transmitter cantenna you will see the LEDs vary from red to green to red, back and forth, tracking the wavefront being radiated out of the transmit cantenna.

To capture the image of the 2.4 GHz wireless wave front, the aperture of a DSLR is left open while the receive cantenna is moved around near the front of the transmitter antenna. All of this must be done in a darkened room.

If the above description is confusing then watch this video: 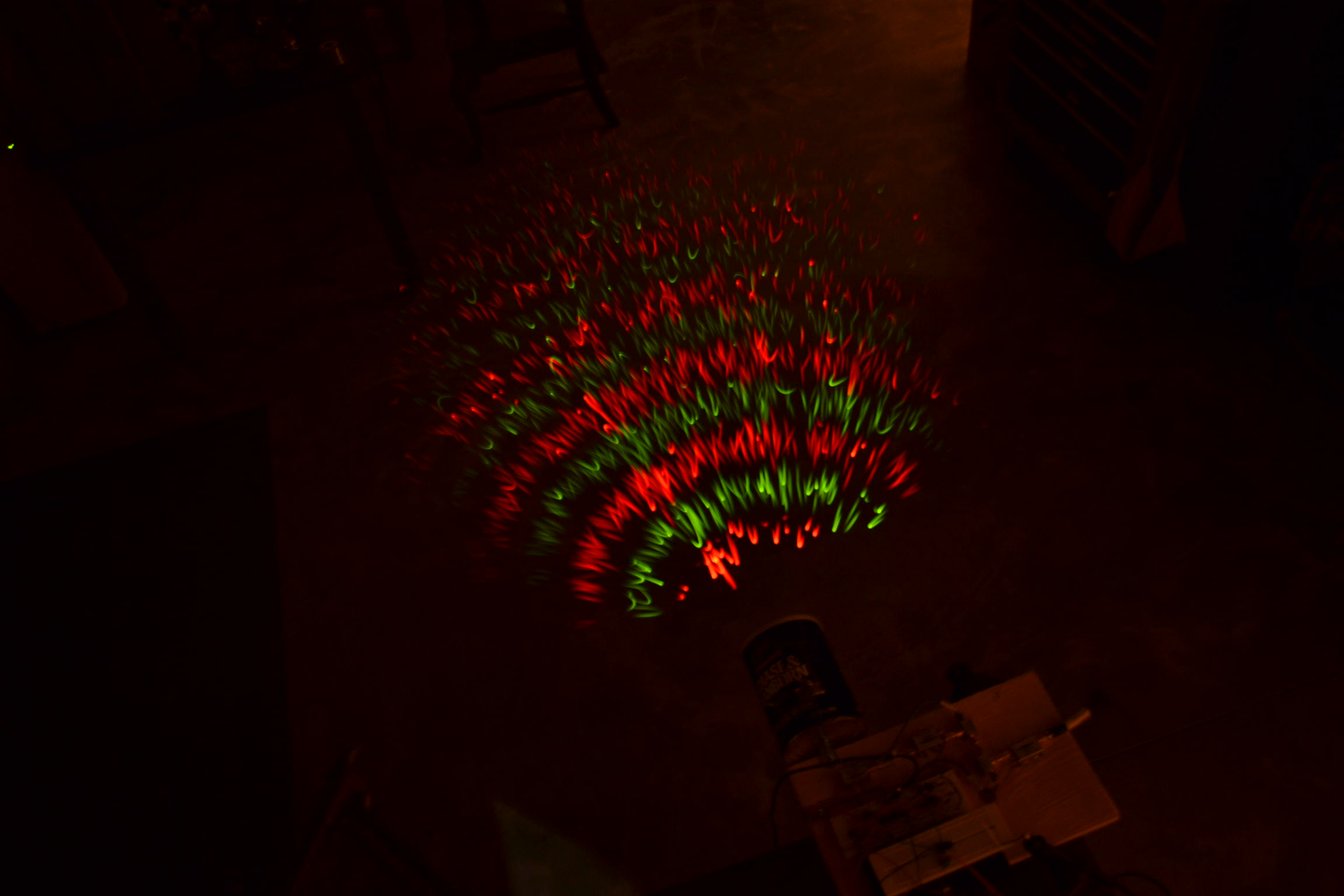 For each wireless router in your home or office this is what the radiated fields look like.

This work helped to spur an innovative competition sponsored by IEEE MTT where some of these methods were used for a variety of scenarios and the results are amazing (scroll to about 2 min into video below):

Its well within your ability to measure and observe the nature of wireless propagation. See for yourself what wireless signals look like propagating through your lab and your home. If you’re still not convinced that this is for you, take a look at [David Schneider’s] Coffee Can Radar presentation, and my own video demonstrations of Doppler shift using the hardware.

Gregory L. Charvat likes to image wireless radiation, is the author of Small and Short-Range Radar Systems, a visiting research Scientist at MIT Media Lab, co-founder of Hyperfine Research Inc. and Butterfly Network Inc. Greg is editor of the G. L. Charvat Series on Practical Approaches to Electrical Engineering. Greg is a former staff member at MIT Lincoln Laboratory, where he created the MIT Through Wall Radar the MIT Build a Radar course. In addition to this, he has done many more things and is involved in lots of interesting stuff.

51 thoughts on “See Actual Microwaves — No More Faking It”