The motivation for devising unique digital modes is two fold. First, hams don’t have unlimited bandwidth, especially in the high frequency (HF) bands that allow for long distance communications. Anything that takes less bandwidth is welcome. Second, HF bands have rough characteristics. Signals fade, atmospheric noise causes static and crashes, and other stations cause interference. There are other special cases too, like bouncing signals off meteors where the right digital strategy can significantly improve odds of getting messages through.

One of the first of these soundcard methods was PSK31. This mode uses a very low symbol rate and encodes data by using phase transitions. To avoid high frequency harmonics, the phase shifts occur only at zero crossings. The 31 in the name refers to the 31.25 baud rate (that’s not K baud, that’s baud; just more than 30 bits per second). To help make up for the slow baud rate, the system employs a variable length code so common letters use shorter bit patterns. Of course, the bandwidth used is also about 31Hz, so that’s one benefit.

Hams use software to decode all the signals in their receiver’s audio at once. Historically, you wanted to filter away all the signals except the one you are listening to. With PSK31, you want a wide filter and you let the DSP home in on all the signals, filtering each one digitally. For example, the picture below shows a waterfall display of several PSK31 signals coming in at one time. The waterfall is a special graph where the X axis (left to right) is frequency and the Y axis (vertical) is time. The “worms” crawling down the waterfall are signals (you can also see the snow of random noise). The PC can read data from all the signals at once easily.

Digital sound card modes have become even more sophisticated from there. One ham, [WB8NUT], has an interesting page that summarizes many modes and includes sound clips. Different modes have different purposes. For example, packet is an adaptation of X.25 over radio frequencies and can be used as a physical layer for TCP/IP. JTMS is useful for meteor scatter and JT65 for moonbounce (yes, that’s what it sounds like) and can enable slow data transfer with signals inaudible to the human ear. Many of these protocols use forward error correction and use sophisticated codes like Reed-Solomon for error detection and correction. 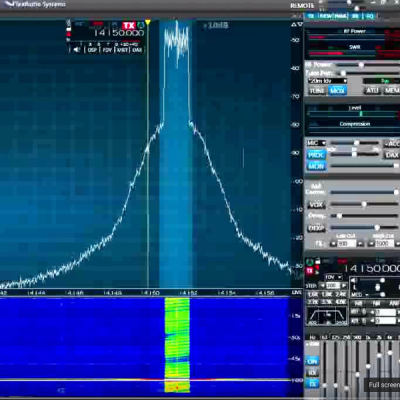 Even voice has gone digital. We covered that earlier and the linked YouTube video (and the picture, right) shows a voice contact (a QSO) that is difficult to understand using regular analog transmissions, but is perfectly clear using the digital techniques. Better performance and reduced bandwidth all thanks to PC-based DSP. Then again, not all solutions require DSP, but widespread adoption has been due to the ease of development and use with a common PC.

My point isn’t related to any particular mode, though (if you really want to see a demo of PSK31, check out the video below). In the non-Ham community, we see people build new computer languages, operating systems, and even CPUs. But it is pretty rare to see new radio modulation schemes. With few exceptions, hackers buy radios and take what they get with them.

If you want to experiment with little or no investment, check out WebSDR (see picture below). With the right Web browser, you can borrow someone’s radio (which is cool all by itself) and then route audio into one of the many digital mode programs (like fldigi, for example). To start, look for a radio that is in a part of the world where it is day time, tuned in the 20 meter band, and look at 14.070 for PSK31 activity. Note that in the screen shot, I was one of 147 users listening to the radio at one time and we didn’t all have to listen to the same thing. 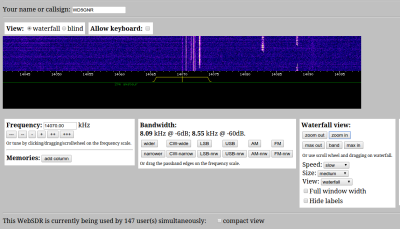 Maybe the hacker community could take a cue from the hams. Radio experimentation has a lot of potential. Granted, it is a little easier because hams have radio frequencies where they are allowed to experiment. Yet there are digital and voice bands available to everyone and (depending on your local laws) it might be interesting to see just how much data you could ship over such an audio channel. Or you could bite the bullet and become a ham yourself (that’s a lot easier than it used to be in most countries including the United States).

Challenging? You bet. But really, no more challenging than a scanning tunneling microscope or building a custom CPU. Who’s up for it?