At this point we’re all well aware of the near-desktop performance afforded by the Raspberry Pi 4, so it should go without saying that its a huge upgrade over the pokey Raspberry Pi Model B+ from 2014 that students have been working with until now. Just as important as the improvement in raw computational power, having access to fifteen times the memory will enable more complex tasks that simply weren’t possible before.

To make use of all that extra power, the new Astro Pi MK II includes a wider array of sensors in addition to upgraded versions of the ones which were used on the original hardware. The new Sense HAT V2 still includes the gyroscope, accelerometer, and magnetometer as well as sensors to measure humidity, temperature, and pressure inside the ISS. But this time around there’s also a passive infrared sensor (PIR), as well as a color and luminosity sensor.

But perhaps the most exciting sensor upgrade comes in the form of the Raspberry Pi HQ camera. The 12.3 megapixel Sony IMX477 sensor is a huge improvement over the dinky camera module that was available back when the first Astro Pi was launched. It can also accept CS-mount lenses, meaning teams that send their camera-aware code up to the Astro Pi MK II will have the option of having different lenses and filters installed while their project is running. For example, with the appropriate filter, students will be able to perform normalized difference vegetation index (NDVI) observations to monitor and study the distribution of plant life on the Earth’s surface. 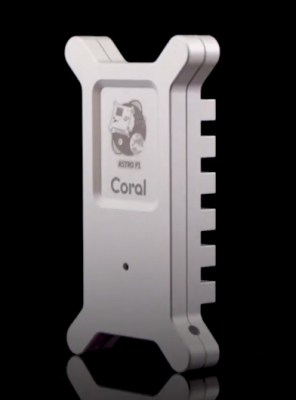 When students really need to kick things into high gear, they’ll also have the option of utilizing the Coral USB Accelerator that will be accompanying the Astro Pi MK II. This application-specific integrated circuit (ASIC) designed by Google connects the Pi’s USB 3.0 port and can perform up to four trillion operations per second while consuming only two watts of power.

Developed specifically for machine learning, this low-power device can run TensorFlow Lite models at incredible speeds. The official documentation says that, when paired with a desktop-class processor, the Accelerator can run the MobileNet v2 image classification and detection model at nearly 400 frames per second.

Obviously its capabilities will be reduced when working in conjunction with the Pi 4, but it will still be a huge boon for teams that want to do machine learning in orbit. When combined with the new high-resolution camera, the computer vision prowess of the Accelerator should provide some fascinating opportunities for real-time Earth observations.

Like the Astro Pi itself, the Coral USB Accelerator has been clad in a custom designed aluminum enclosure that’s clearly designed to help passively dissipate heat. But otherwise, it’s identical to the commercial unit that you can purchase right now for $60 USD. This is the same sort of logic that lead the ESA to select the Raspberry Pi in the first place, as it allows schools to put together affordable development environments using largely off-the-shelf components.

So when will students, or Hackaday readers, be able to build their own Astro Pi MK II? Unfortunately, that’s not immediately clear. Obviously you can pick up a Raspberry Pi 4 and a Coral USB Accelerator right now, but the word is that chip shortages have delayed efforts to produce the new Sense HAT in large quantities. Students taking part in the program can use the web-based emulator to test their code for the time being, with the teams selected to move on to Phase 2 slated to get the real thing by November. Given the success of the original Sense HAT it seems inevitable that the new version will work its way to retail eventually, but it probably won’t happen this year.

Similarly, while the project’s website says they’ll be up for download in the near future, the CAD files for the new Astro Pi MK II enclosure aren’t yet available to the public. The Raspberry Pi Foundation has a detailed guide on building a replica of the original Astro Pi, complete with information on 3D printing the case, so hopefully something similar is being put together for the December launch of the new version.

Back in 2017, a company produced a $250 USD replica of the original Astro Pi case that was so accurate, Eben Upton himself said they were nearly indistinguishable from the flight-ready units. Once the CAD files are out we might see a similar effort to duplicate the new version, but don’t expect it to be any cheaper this time around.

Even if you’re too old or not on the prerequisite side of the planet to take part in the official Astro Pi Challenge, the platform developed by the ESA and the Raspberry Pi Foundation is still attractive for citizen scientists and experimenters down here on Earth. Hopefully by the time the Challenge entries start getting uploaded to the International Space Station in Spring of 2022, we’ll be able to follow along at home with our own model of the hardware.