Yesterday, iFixit.com announced that they are releasing all of their manuals under the Creative Commons Attribution-Noncommercial-Share Alike license. The site has long been an abundant source of tear-down photos for hardware and has been gaining momentum as the go-to source for Apple hardware repair information. With the move to Creative Commons, the gates are open to distribute and improve upon the site’s content. There are even plans in the works to host user-submitted improvements (something akin to a wiki?) to the guides but there are not yet any details. The news also includes mention of forthcoming support for translated guides around the end of 2010.

The Hackaday crowd would rather fix things than throw them away. As iFixit moves past Apple products to a wider range of repair manuals and starts working collaboratively with users, we hope to see an explosion of detailed tips, tricks, and guides to keep our stuff working better, longer.

We have a new hero in the COVID-19 saga, and it’s some hacker in Poland. Whoever this person is, they are making bootleg dongles that let ventilator refurbishers circumvent lockdown software so they can repair broken ventilators bought from the secondhand market. 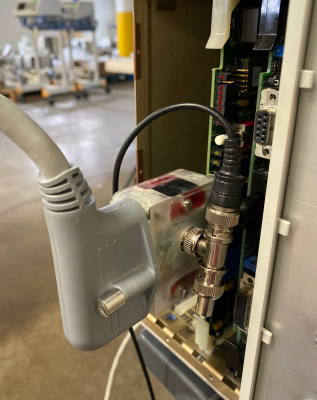 The dongle is a DIY copy of one that Medtronic makes, which of course they don’t sell to anyone. It makes a three-way connection between the patient’s monitor, a breath delivery system, and a computer, and lets technicians sync software between two broken machines so they can be Frankensteined into a single working ventilator. The company open-sourced an older model at the end of March, but this was widely viewed as a PR stunt.

This is not just the latest chapter in the right-to-repair saga. What began with locked-down tractors and phones has taken a serious turn as hospitals are filled to capacity with COVID-19 patients, many of whom will die without access to a ventilator. Not only is there a shortage of ventilators, but many of the companies that make them are refusing outside repair techs’ access to manuals and parts.

These companies insist that their own in-house technicians be the only ones who touch the machines, and many are not afraid to admit that they consider the ventilators to be their property long after the sale has been made. The ridiculousness of that aside, they don’t have the manpower to fix all the broken ventilators, and the people don’t have the time to wait on them.

We wish we could share the dongle schematic with our readers, but alas we do not have it. Hopefully it will show up on iFixit soon alongside all the ventilator manuals and schematics that have been compiled and centralized since the pandemic took off. In the meantime, you can take Ventilators 101 from our own [Bob Baddeley], and then find out what kind of engineering goes into them.

END_OF_DOCUMENT_TOKEN_TO_BE_REPLACED

Back on Earth, the star tracker concept has become quite popular among photographers who try to image the night skies. Even in your living room,  VR systems also rely on knowing the position of the user’s body and any peripherals in space. In this article we’ll take a look at the history and current applications of this type of position tracking. END_OF_DOCUMENT_TOKEN_TO_BE_REPLACED

Historically gaming consoles are sold at little-to-no profit in order to entice customers with a low up-front price. The real profits roll in afterwards from sales of games and accessories. Seeking a slice of the latter, aftermarket accessory makers jump in with reverse-engineered compatible products at varying levels of “compatible”.

When the Nintendo Switch was released with a standard USB-C port for accessories, we had hoped those days of hit-or-miss reverse engineering were over, but reality fell short. Redditor [VECTORDRIVER] summarized a few parts of this story where Nintendo deviated from spec, and accessory makers still got things wrong.

Officially, Nintendo declared the Switch USB-C compliant. But as we’ve recently covered, USB-C is a big and complicated beast. Determined to find the root of their issues, confused consumers banded together on the internet to gather anecdotal evidence and speculate. One theory is that Nintendo’s official dock deviated from official USB-C dimensions in pursuit of a specific tactile feel; namely reducing tolerance on proper USB-C pin alignment and compensating with an internal mechanism. With Nintendo playing fast and loose with the specs, it makes developing properly functioning aftermarket accessories all the more difficult.

But that’s not the only way a company can slip up with their aftermarket dock. A teardown revealed Nyko didn’t use a dedicated chip to manage USB power delivery, choosing instead to implement it in software running on ATmega8. We can speculate on why (parts cost? time to market?) but more importantly we can read the actual voltage on its output pins which are too high. Every use becomes a risky game of “will this Switch tolerate above-spec voltage today?” We expect that as USB-C becomes more common, it would soon be cheapest and easiest to use a dedicated chip, eliminating the work of an independent implementation and risk of doing it wrong.

These are fairly typical early teething problems for a new complex technology on their road to ubiquity. Early USB keyboard and mice didn’t always work, and certain combination of early PCI-Express cards and motherboards caused damage. Hopefully USB-C problems — and memories of them — will fade in time as well.

END_OF_DOCUMENT_TOKEN_TO_BE_REPLACED

Samsung’s fancy new high-end smartphone with a flexible, foldable OLED display has been failing in worrying numbers for the first reviewers who got their hands on one. Now iFixit has looked into the issue using their considerable amount of smartphone tear-down experience to give their two cents. They base many of their opinions on the photos and findings by the Verge review, who were one of the (un)lucky ones to have their unit die on them.

The Galaxy Fold was supposed to be this regular smartphone sized phone which one can open up fully to reveal a tablet-sized display inside. The use of a flexible OLED display was supposed to create a seamless display without the annoying center line that having two individual displays would produce. Unfortunately it’s this folding feature which produces issues.

As iFixit notes, OLEDs are rather fragile, with their own tear-downs of regular OLED-equipped devices already often resulting in the damaging of the display edges, which spells doom for the internals of them as oxygen and other contaminants can freely enter. This means that maintaining this barrier is essential to keep the display functioning.

This is probably the reason why Samsung chose to install a screen protector on the display, which unfortunately was mistaken for a protective foil as found on many devices. The subsequent removal of this protector by some reviewers and the mechanical stress this caused destroyed some screens. Others had debris trapped in the fold between both halves of the display, which caused visible bumps in the display when opened.

The relatively massive spacing between the hinge and the display seems almost purposefully engineered to allow for the ingress of debris. This combines with the lack of any guiding crease in the center of the display and the semi-random way in which humans open and close the Fold compared to the perfectly repeating motion of the folding robots Samsung used to test the display. It seems that Samsung and others still have some work to do before they can call folding OLED displays ready for production.

Finally, have a look at this video of Lewis from UnboxTherapy pulling a folding robot with opening and closing a Fold one-thousand times: