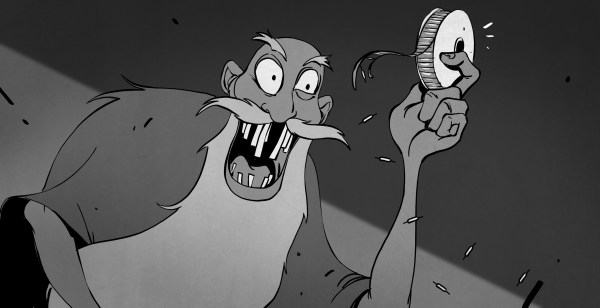 Wired and SCMP are reporting on interesting trivia from the realm of chip shortages. Apparently, some large conglomerate out there is buying new washing machines and scavenging the chips they can’t obtain otherwise. My imagination pictures skilled engineers in a production room, heavy-duty electric screwdrivers and desoldering toolkits on the floor next to them, and a half-torn-down washing machine about to reveal its control board with an STM32 right in the middle. This might not be the most skilled job, but it’s a change of pace, and hey, as long as the rate stays the same?

Whichever company is doing this, they’re in a conundrum for sure. One of the articles offers an example of a $350,000 spectrometer manufacturing being stalled by lack of a $0.50 part – while this feels exaggerated, it’s within the realm of possibility. For car manufacturers, the difference isn’t as dire, but still severe enough, and not meeting the production targets has ramifications other than the financial ones. It might indeed make sense to buy a $150 washing machine in order to finally be able to move a $30,000 car off the assembly line.
END_OF_DOCUMENT_TOKEN_TO_BE_REPLACED 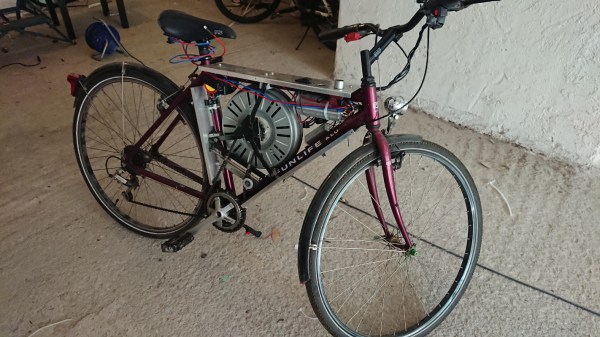 The “Spin Cycle” is an amazing electric bicycle built using a motor salvaged from a washing machine; when the puns are this perfect you have to roll with them. [jimminecraftguy’s] creation is one of the most hacked-together yet functional electric vehicle we’ve seen in a long time.

The drive train of this bicycle starts with a brushless DC motor from a washing machine. It has been slightly modified to run on 48 volts, and is installed inside the triangle of the bike’s frame. It has a chain driving the bike’s crank, retaining the original chain and gearing setup (unlike many electric bike hacks that utilize hub motors). The crank has also been specially modified to include a freewheel, a necessary feature so that the motor can operate without spinning the pedals. Everything except the motor has been custom fabricated including the mounts and the electronics.

[jimminecraftguy] reports speeds of 110 kph which is a little crazy for a 20-year-old aluminum frame bike, and we’d guess it’s not street legal in many jurisdictions, but we can’t really find much fault with this build in general based on the amount of innovation required to get this working at all. A few more improvements for the build are in the works, including improved batteries and a cover for the sides to keep the local law enforcement from getting too suspicious. We can’t wait to see the final version. END_OF_DOCUMENT_TOKEN_TO_BE_REPLACED 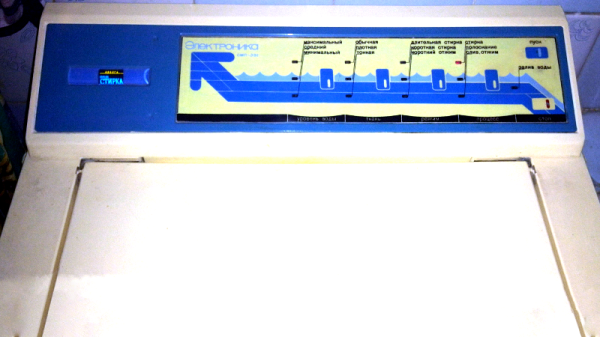 The humble washing machine is an appliance that few of us are truly passionate about. They’re expected to come into our lives and serve faithfully, with a minimum of fuss. In the good old days, it was common for a washing machine to last for well over 20 years, and in doing so ingratiate itself with its masters. Sadly now while the simple mechanical parts may still be serviceable, the electronics behind the scenes can tend to fail. This is a Russian story (Google Translate link) about giving a new brain to an old friend.

The machine in question is known as an Oriole, and had served long and hard. Logic chips and entire controllers had been replaced, but were continuing to fail. Instead, a replacement was designed to keep the machine operational for some time yet. Rather than relying on recreating the full feature set of the machine it was decided to eliminate certain things for simplicity. Settings for different fabric types or wash modes were eliminated, which is an easy choice if like most people all your washes are done in the same mode anyway. A water level sensor was found to be no longer functioning properly and was simpler to eliminate than repair.

The brain is a PIC microcontroller, with an ESP12 acting as a webserver for monitoring and control. Additionally, a glass lens was taken from some former medical equipment and neatly installed in the control panel of the machine before an OLED display, giving the machine far more feedback than before. Control is still done with the machine’s original buttons. Temperature sensors were added as well to allow the machine to shut itself down in the event of an overheating problem. It’s all tied together on what looks to be a classic single-sided homebrew PCB.

It’s a great project that shows it’s easy to bring modern electronic might to bear on vintage mechanical hardware, with great results. A washing machine lives to see another day, another load – and the landfill remains just that much lighter, to boot.

We’ve seen controller builds for old washing machines before, too – like replacing mechanical control with an Arduino.

[Thanks to Tirotron for sending this in!] 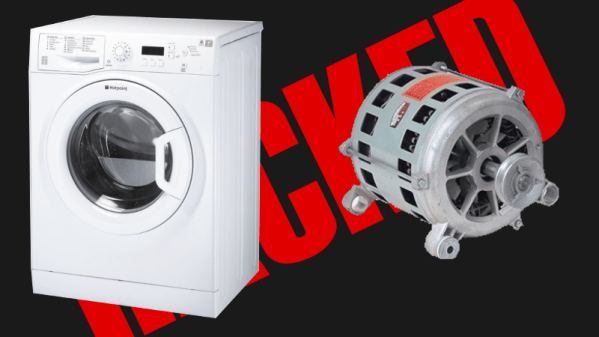 Big ol’ motors are great when you need to get a big job done, but they can be expensive or hard to source new. However, there’s a source of big, fat, juicy motors right at home for most people – the garden variety washing machine. These motors would usually require a special controller, however [Jerry] is here to show us how to hack the controller that comes with the machine.

The hack begins as [Jerry] decides to gut a Maytag MAH7500 Neptune front loader. Many projects exist that borrow the motor but rely on a seperately sourced variable frequency drive, so the goal was to see if the machine’s original controller was usable. The machine was first troubleshooted using a factory service mode, which spins the drum at a set speed if everything is working correctly.

From there, it was a relatively simple job to source the machine schematics to identify the pinouts of the various connectors.  After some experimentation with a scope and a function generator, [Jerry] was able to get the motor spinning with the original controller doing the hard work.

It’s a simple hack, and one that relies on the availability of documentation to get the job done, but it’s a great inspiration for anyone else looking to drive similar motors in their own projects. The benefit is that by using the original motor controller, you can be confident that it’s properly rated for the motor on hand.

Perhaps instead of an induction motor, you’d rather drive a high powered brushless DC motor? This project can help. 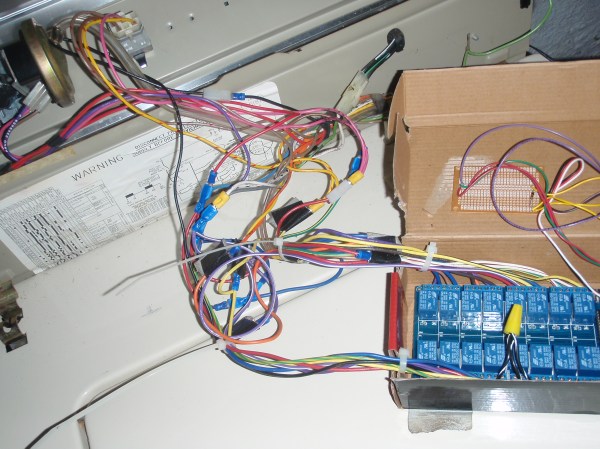 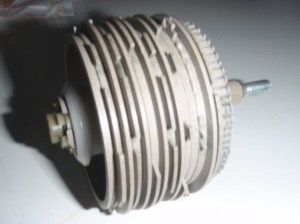 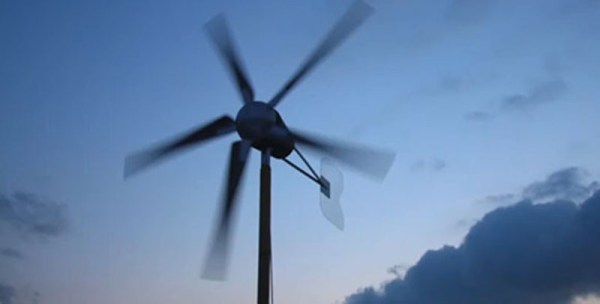 Green hacks implement one of two philosophies. The first is über-technical, with very expensive, high-quality components. The other side of this coin creates green power out of junk. [Timot] obviously took the latter choice, building a windmill out of an old washing machine motor and a few bits of PVC.

The generator for the windmill is based on a Fisher and Paykel direct drive usually found in clothes washing machines, rewired to provide 12 Volts at low RPM. At high speeds, the generator can produce 80 Volts, so a charge controller – even one based on a 555 chip – was an excellent addition.

For the other miscellaneous mechanical parts of the build, [Timot] cut the blades of the windmill out of 200 mm PVC pipe and sanded them down a bit for a better aerodynamic profile. With a custom fiberglass spinner, [Timot] whipped up a very attractive power station that is able to provide about 20 watts in normal conditions and 600 watts when it’s very windy. Not enough to power a house by any means, but more than enough to charge a cellphone or run a laptop for a few hours out in the back country.