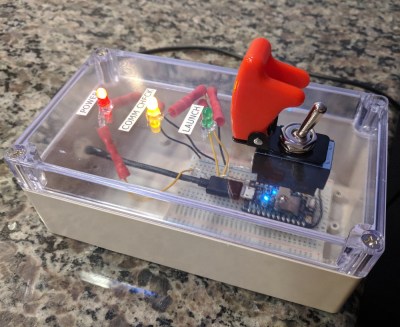 END_OF_DOCUMENT_TOKEN_TO_BE_REPLACED

Robotic arms have found all manner of applications in industry. Whether its welding cars, painting cars, or installing dashboards in cars, robotic arms can definitely do the job. However, you don’t need to be a major automaker to experiment with the technology. You can build your own, complete with proper motion planning, thanks to Arduino and ROS.

Motion planning is important, as it makes working with the robotic arm much easier. Rather than having to manually specify the rotation of each and every joint for every desired movement, instead mathematics is used to figure everything out. End effectors can be moved, and software will figure out the necessary motions required to achieve the end results. This functionality is baked into Robot Operating System (ROS) and proves useful to this project.

The construction of this particular arm is impressive in its simplicity, too. It has 7 degrees of freedom, which is plenty to play with. The arm is built out of LEGO Technic components, which are attached to the servos with the addition of some 3D printed components. It’s a smart and simple way to integrate the servos into the LEGO world, and we’re surprised we don’t see this more often.

Robotic arms remain an area of active research; there are even efforts to allow them to self-correct in the event of damage. Video after the break.

END_OF_DOCUMENT_TOKEN_TO_BE_REPLACED

It is fun to make a toy vehicle with Lego, but it is even more fun to make one that actually works. [PeterSripol] made two Lego submarines, and you can see them in the video below. There isn’t a lot of build information, but watching the subs fire missiles and then getting destroyed by depth charges is worth something.

One of the subs is larger and uses a rudder to steer. It was apparently harder to control than the other smaller sub which used two motors thrusting opposite one another to steer. Looks like fun.

END_OF_DOCUMENT_TOKEN_TO_BE_REPLACED

Before 3D printers, there was LEGO. And the little bricks are still useful for putting something together on the quick. Proof is YouTuber [Matthias Wandel]’s awesome bottle cap shooter build that uses rudimentary DIY computer vision to track you and then launch a barrage of plastic pieces at you.

This is an amazing project that has a bit of something for everyone. Lets start with the LEGO. [Matthias Wandel] starts with making a crossbow designed launcher and does an awesome job with showing us how it works in a video. The mechanism is an auto reloading and firing system that can be connected to a stepper motor. Next comes the pan and tilt mechanism which allows the turret to take better aim at moving targets: more LEGO and stepper motors.

The target tracker uses color matching in a program that curiously uses no OpenCV. It compares consecutive frame and then filters out red objects – the largest red dot is it. Since using a fisheye lens on the Raspbery Pi camera adds distortion, [Matthias Wandel] uses a jig made with more Legos to calibrate the image.

The final testing involved having his own child walk around the room being hunted but the autonomous machine. Kids do love toys even if they are trying to shoot bottle caps at them.

Want more Lego inspiration? Check out the Lego Quadcopter Mod and the Lego Tank with the ESP8266.

END_OF_DOCUMENT_TOKEN_TO_BE_REPLACED

[Matthias Wandel] is best known for his deeply interesting woodworking projects, so you might be forgiven for not expecting this lovely chocolate-engraving pantograph made from LEGO. With it, he carves a delightful valentine’s message into a square of chocolate, but doesn’t stop there. He goes the extra mile to cut the chocolate carefully into a heart, and a quick hit with a heat gun takes the rough edges off for a crisp and polished end result.

The cutting end is a small blade stuck inside a LEGO piece, but that’s the only non-LEGO part in the whole assembly. A key to getting a good carve was to cool the chocolate before engraving, and you can see the whole process in the video embedded below.

END_OF_DOCUMENT_TOKEN_TO_BE_REPLACED

If you had to guess the age of a person hailing from a country in which Lego is commonly available, you might very well do it by asking them about the Lego trains available in their youth. Blue rails or grey rails, 4.5, 9, or 12 volt power, and even somewhat unexpectedly, one rail or two. If that last question surprises you we have to admit that we were also taken aback to discover that for a few years in the 1980s everybody’s favourite Danish plastic construction toy company produced a monorail system.

[Mike Rigsby] had a rather ambitious Christmas display to produce, and as part of it included a pair of reindeer, Rudolph and Bluedolph, atop freight cars on a loop of Lego monorail. He didn’t just use classic Lego parts off-the-shelf, instead he recreated the system in its entirety on his 3D printer; locomotive, rolling stock, and all. In a simlar way tot he original his locomotive sits between the two freight cars, each container housing a pair of AA batteries which together power the unit.

The Lego system isn’t perhaps a classic monorail, in that it involves a four-wheeled vehicle that is guided by a central rail rather than sitting upon it. Drive comes from teeth on the side of the rail which mesh with a gear on the power car. There have been 3D-printable sections of it available as add-ons for owners of classic sets for a while, but this may be the first printable locomotive and train. The Christmas novelty aspect of it all may be a little past its sell-by date here in February, but it’s still worth a look as a potential source of parts for any project that might require a linear rail system.

Perhaps surprisingly we’ve never featured a monorail before, though we have brought you a MagLev.

We probably all used to make our Lego fly by throwing it across the room, but Flite Test have come up with a slightly more elegant solution: they converted a Lego quadcopter to fly. They did it by adding a  miniature flight controller, battery and motors/rotors to replace the Lego ones in the Lego City Arctic Air Transport kit. This combination flies surprisingly well, thanks to a thoughtful design that balances the heavier components inside the case.