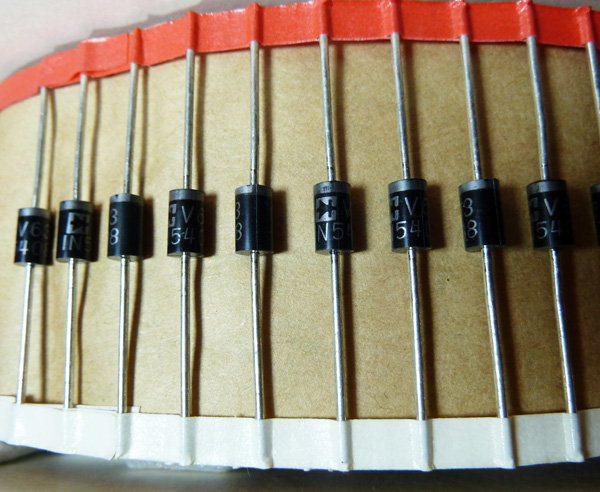 Last week we covered diodes, specifically thermionic and PN junction diodes. But oh, there are more; and they’re special!

One of the the most commonly used ‘specialty’ diode would have to be the metal-semiconductor junction diode. Since metal has a lower work function than semiconductor crystal, electrons tend to flow from the metal to the crystal and a diode can be made. These Crystal Rectifiers actually predate both the silicon and thermionic diode, and at one point were very commonplace. So much so, that old schematics identify diodes as ‘CR’ rather than ‘D’. Crystal rectifiers are still used today, albeit in much smaller quantities. Although they are generally poor at their job, these diodes have a very low voltage drop and absolutely no reverse recovery time. This makes them well suited for RF applications; things like Class-C amplifiers and radio detectors. In fact you’d be hard pressed to find a radio without one of these guys right after the tuning capacitor.

That said, point-contact crystal rectifiers are all but completely useless for large signals and HF rectification. Luckily for us there is a modern equivalent which can preform these tasks; the Schottky Diode.

Operationally these diodes are no different than Crystal Rectifiers, but modern manufacturing techniques allow us to directly bond a metal cathode to silicon, creating a larger contact area than a pointed needle could ever hope to achieve. As a result, we get all the low voltage goodness of a crystal rectifier combined with all the high current fun of a PN junction. Rectifying 200 amps at 150kHz? No problem.

But what if even these aren’t fast enough? 1Ghz just isn’t enough! Well, there’s always the Tunnel Diode.

Tunnel Diodes aren’t all that different from PN diodes, in fact they are PN diodes. Unlike a normal rectifier, tunnel diodes are doped very, very heavily and as a result have a very small bandgap –and a very small capacitance and recovery time.

Tunnel diodes are tricky little beasts. As you increase the diode’s forward bias electrons begin to tunnel through the barrier, but as the voltage increases further less electrons will flow and a negative resistance is established. By increasing the voltage further, normal diode operation is established.

This negative resistance region allows the diode to not only rectify microwaves, but generate them too. With the right LC tank it’s possible to make a microwave generator with a tunnel diode, or a microwave amplifier if you’re really daring. Albeit they are not wonderful oscillators, they do work.

There is a better diode for that job though, but that one comes next week…

One thought on “A Bit More About The Diode”