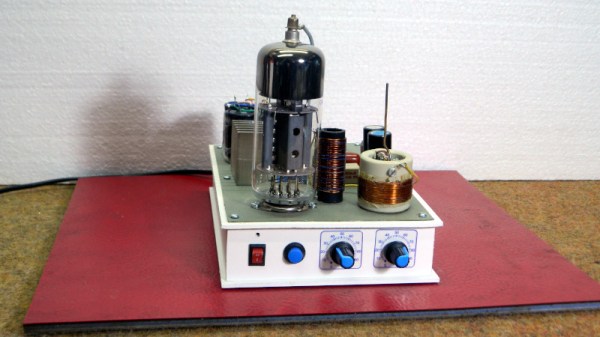 In the world of audio there are a huge variety of esoteric technologies which are rarely seen. One such is the plasma tweeter, a type of loudspeaker which generates sound by modulating a small electrical discharge. The benefit of this design comes in its delivering the closest possible to a point audio source, in effect the theoretical ideal speaker for treble frequencies. They’re a little hazardous due to the voltage but aren’t too difficult to make, as demonstrated by [Mircemk] whose version uses a recycled power pentode tube — which is how it showed up in the Hack it Back round of the Hackaday Prize.

It can be thought of as a cousin of the Tesla coil, with the same resonant oscillator but no capacity hat. Instead the top of the coil ends in a point, from which in the perfect speaker a ball of plasma replaces the Tesla’s impressive sparks. In this case the pentode is joined by a high-voltage TV line output transistor as a bias supply, which is in turn modulated with the audio through a small amplifier. It sometimes needs the plasma teasing out of it through discharge to a screwdriver, but the result is a very effective and clear plasma tweeter.

If plasma tweeters interest you, we’ve featured them before. 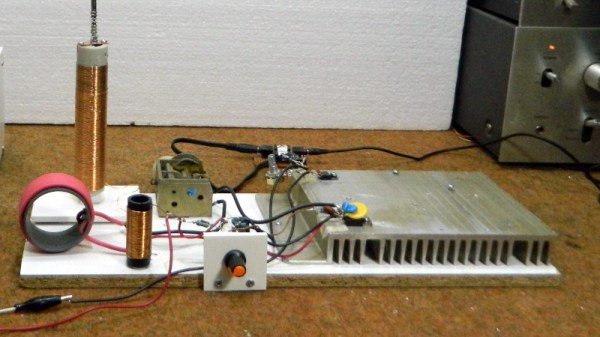 When our ears resolve spatial information, we do so at the higher treble frequencies rather than the bass. Thus when setting up your home cinema you can put the subwoofer almost anywhere, but the main speakers have to project a good image. The theoretical perfect tweeter for spatial audio is a zero mass point source, something that a traditional speaker doesn’t quite achieve, but to which audio engineers have come much closer with the plasma tweeter. This produces sound by modulating a small ball of plasma produced through high-voltage discharge, and it’s this effect that [mircemk] has recreated with his HF plasma tweeter.

A look at the circuit diagram and construction will probably elicit the response from most of you that it looks a lot like a Tesla coil, and in fact that’s exactly what it is without the usual large capacitor “hat” on top. This arrangement has been used for commercial plasma tweeters using both tubes and semiconductors, and differs somewhat from the singing Tesla coils you may have seen giving live performances in that it’s designed to maintain a consistent small volume of discharge rather than a spectacular lightning show to thrill an audience.

You can see it in operation in the video below the break, and it’s obvious that this is more of a benchtop demonstration than a final product with RF shielding, It’s not the most efficient of devices either, but given that audiophiles will stop at nothing in their pursuit of listening quality, we’d guess that’s a small price to pay. Efficiency can be improved with a flyback design, but for the ultimate in showing off how about a ring magnet to create the illusion of a plasma sheet?