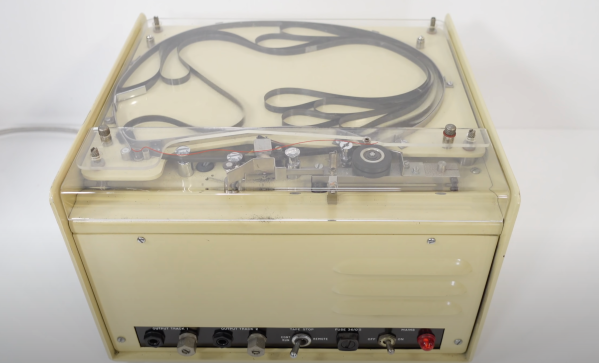 If you stop to think, the number of pre-recorded voices and sounds you might hear on an average day might number in the hundreds. Everything from subway announcements, alerts on your phone, to sound effects at Disneyland is a sound that triggers in response to an event. [Techmoan] came across a device that many of us have interacted with, but likely never seen: a humble Sontranic 9A Announcer.

In their heyday, these sorts of devices formed the backbone of audio feedback. Messages from Father Christmas were recorded and could be reached when calling a number. Sound effects in theme parks that were activated when a ride activated some hidden switch. Anything where the sound effect needed to play on some sort of trigger.

An interesting thing to note is that this is not a reel-to-reel system. The tape is of the standard 1/4″ magnetic variety, perhaps a little thicker for extra durability. It instead sits in the top of the machine; coiling and uncoiling like a two-dimensional lava lamp. Additionally, there’s nothing clever about detecting the beginning or end of the audio loop (as there were four copies of the same recording on this particular tape). In fact, everything about this machine speaks of reliability as the most important design consideration. A reel-to-reel system would just add more points of failure.

After a little bit of diagnosing, [Techmoan] managed to get the device running again and found the message on the tape to be from the phone system, informing the listener that the line is no longer in service. This banal message is perhaps the best testament to the ubiquity of devices like these.

Perhaps in the future, we’ll see an instrument like this magnetic tape-based one created from a similar machine to the one [Techmoan] found.