The mountainous Italian town of Artena holds an annual soap box derby for wood vehicles – and they mean 100% wood, not a speck of anything else. Fierce competition led [Alessio] to engineering and CNC fabricating these gorgeous wooden roller bearings for the wheels to give him an edge.

Thousands in costume attend the renaissance faire known as “Palio delle contrade di Artena”, and the popular wood-only race is called “La Carettella.” The karts are operated by a two-man team: one in front who brakes, the other in the rear who hops on and off to push as needed throughout the course. There appears to be no steering from the wheels** so turning is also a two-man effort. The wooden levers dragging on the pavement provide some steering from the “driver”, and the push-man often manhandles the entire rear end, drifting where necessary. 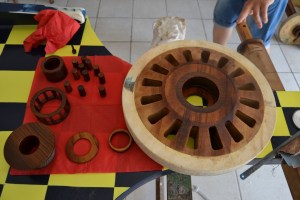 The course also includes full-width obstacles like hay bales. Teams are divided by community or “contrada”, and it was [Alessio]’s team captain who came to him with the special request of roller bearings. Unable to find evidence of other wooden bearings, [Alessio] knew he would have to invent them himself – so he did. 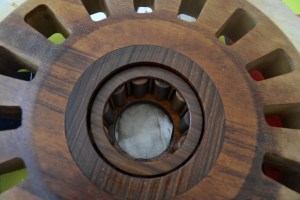 The roller bearings are built into the wheel hub and look just like ones made from hardened steel. [Alessio]’s cellulose of choice was Lignum Vitae, a self-lubricating wood that is also the hardest grown and available for sale (among those labelled “ironwood”). After drafting the wheels and bearings in Rhino they were cut using a 3-axis CNC milling machine and assembled.

Sadly, during the race [Alessio]’s driver managed to crash the kart – twice, maybe it was all the extra speed – so they did not win this year’s Carettella. [Alessio] has his eye on victory next year – enough that he is keeping the actual specs of the design to himself.

Below are 11 magnificent seconds of [Alessio]’s kart run, and some footage of the Artena festival. (Skip to 1:40 for the racing).

** Update – As several astute readers have pointed out, there is clearly steering. The front wheels are mounted to a plate that pivots in the middle of the kart, as controlled by the driver’s feet. Oops.

*** Update – One of our Italian readers has translated that the official rules allow only for a metal steering pin, likely to prevent teams from kartwheeling if a wooden one snapped. Also, while metal parts are not allowed, fasteners like nails and screws are, as subject to judge’s inspection.