One way would be to fill the vase with much smaller objects of a known volume. Then you could add up the smaller volumes to get an estimate of the total volume of the vase. For instance, imagine we fill the vase with marbles. A marble is a sphere, and we can calculate the volume of each marble with the formula 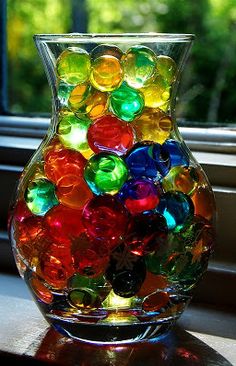 4/3πr3. We count all of our marbles and multiply the total by the volume of a single marble and arrive at our answer. It is not perfect, however. There is a lot of empty space that exists between the marbles as they fill the vase. We are forced to conclude that our estimated volume will be lower that the actual volume.

It would be about this time when our good friend Isaac Newton would ask the question “What if you made the marbles smaller?” Reducing the size of each marble would reduce the empty space that exists between them as they pile up in the vase, giving us a more accurate total volume. But how small? Is there a limit to how small we can make them? “Do not trouble yourself with the limit.” says [Newton]. “You will find that as you make the marbles smaller and smaller, you will begin to converge on a single number – and that number will be the exact volume of your vase.”

Reducing the size of the marble to get a more exact volume demonstrates the idea of the integral – one of the two fundamental principles of The Calculus. The other principle is known as the derivative, which we explained in our previous article by taking a very careful and tedious examination of an arrow in flight. In this article, we shall take the same approach toward the integral. By the end, you will have a fundamental understanding of what the integral is, and more importantly, how it works. Our vase example gives you a good mental image of what the integral is all about, but it is hardly a fundamental understanding of it. Just how do you make those marbles smaller? To answer this question, let us look again at one of Zeno’s moving arrows.

Imagine a drone on a collision course with a brick wall. Let us say that the drone moves from its starting point to a point half way between it and the wall. Let us repeat that process. If we keep moving between a starting point to a halfway point, how do we ever collide with the wall? Those who read our first article in this series would recognize this as a twist on the Dichotomy Paradox. Zeno, a philosopher from the 5th century BC,  thought up the paradox and it took over two thousand years for mankind to answer it. In the last article, we solved his “the arrow” paradox with the derivative. In this article, we shall solve the Dichotomy paradox with the integral.

Those who have been paying attention will recall how the derivative and integral are actually inverses of each other or “two sides of the same ceramic capacitor” I think I put it. In the field of science and mathematics, practitioners like to find symmetry. There is a certain beauty…an elegance to a phenomenon when symmetry can be seen within its boundaries. With that in mind, recall how “the arrow” paradox asked what the velocity of a moving arrow is at an instant in time. In order to obtain the velocity, we needed to know its position at all times. The Dichotomy paradox is the opposite side of the same idea. Zeno is asking where the drone is, or what its position is, at an instant in time. And in order for us to get a position on the drone, we need to know its velocity at all times. As luck would have it, our drone logs such data.

Case of the Wayward Drone

Your automated drone project has an issue. It would appear you forgot a comma when programming its arduino brain, and it took off and got itself lost. Fortunately, the logging function appears to be intact. It was able to transmit its speed and heading for a period of 3 minutes. Unfortunately, its GPS was not 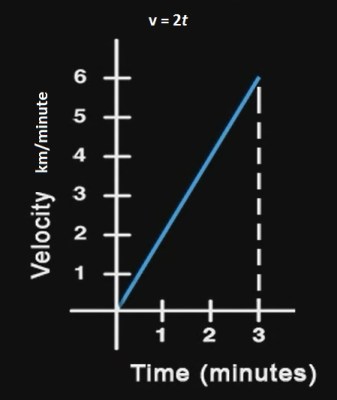 working, so you do not have its location. Looking at the logs, you notice its heading never changed. It appears it flew North the entire flight. You also notice that the speed was not constant, but accelerating.

So here’s what you’ve got. You know the position of where it took off. You know that it flew in a straight line for a period of 3 minutes until the batteries ran out, and you can assume the drone went down at that point. You have the speed at all points in time within the three minutes, and work out that the drone was accelerating at rate of v = 2t. How do you find the location of the drone?

Now, if you’re thinking this sounds like a calc-101 word problem, you are correct! However, we’re not going to solve it by mindlessly plugging in data to an equation. We’re going to find our missing drone by solving the Dichotomy paradox. And by doing so, gain a perfect understanding of how the integral works.

The best way to approach problems like this is to start off with the simplest example possible. Understand it, and then move up in complexity until we can get a handle on our real world problem. Keeping in this 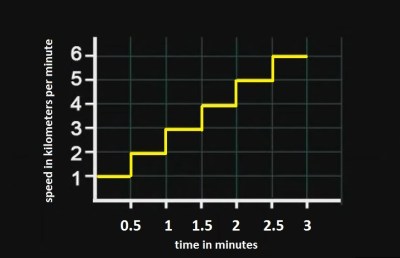 light, let us pretend that the drone was traveling at a constant speed of 1 kilometer per minute. So after three minutes of flight, the drone would have traveled 3 kilometers. All we have to do is go to the launch pad and walk 3 kilometers in the North direction and we should find our drone.

Now let us pretend that the drone was accelerating in increments. Such that at takeoff to the half minute mark, it was traveling at 1 kilometer per minute. From the half minute to the 1 minute mark, it was traveling at 2 kilometers per minute. Every 30 seconds, the drone increases its speed by 1 mile per minute until its 3 minutes of flight time are up. Let us look at the graph on the right and calculate the distance traveled. If distance is equal to time multiplied by speed, then:

Finding how far the drown traveled is pretty simple when speeds are constant. Unfortunately the real world doesn’t usually work like this. Our drone was accelerating at a constantly changing rate of 2t for 3 minutes. How do we deal with this? Well, we know how to add up the pieces at constant speeds to get a total distance traveled. What if we could take the speed of our accelerating drone and break it into little pieces, calculate the average distance traveled during the little pieces, and then add those pieces of distance traveled up to get a total? Much in the same way we broke the area of our vase into little spheres and added them all up.

Why are we doing this? Because we know how to calculate the total distance traveled of the ghost drone.

Because our ghost drone is always lagging the the real drone, this estimate will be an underestimate of the 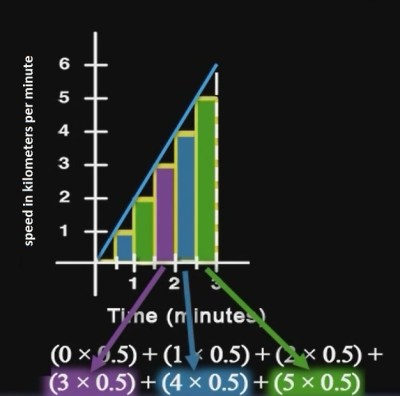 So we have an estimated distance traveled of 7.5 kilometers North of the launch point. At this point we need to see what we can do to make that estimate more accurate. Those who have been following this calculus series will know that we can get a more accurate estimate of the distance traveled by the real drone by taking finer and finer time intervals when calculating the distance traveled from our ghost drone. Looking at the graph on the right, you can see that the width of the vertical rectangles are actually the time intervals of our measurements. If we make this width smaller, we can fit more of them under the v = 2t function (blue line) and reduce the space not occupied by the rectangles. It’s the same concept as making the marbles in our vase smaller to reduce the empty space between them.

This is becoming a very laborious process, but a necessary one. As you keep calculating the estimated distance traveled with finer and finer time intervals, you will begin to converge on a single number: 9. The same number would appear if we did overestimate calculations. We can now say that our drone traveled a distance of 9 kilometers. And we can also say that we can know the distance the arrow traveled in the Dichotomy paradox, regardless of its velocity.

The Power of the Integral

So you go to your launch point and head 9 kilometers North and locate your drone. You get it home and realize the camera was running during the entire flight. You take a look at the video and become curious at some of the landmarks. You begin to wonder where they are. You just worked out the total distance traveled by the drone…is it possible to find the distance between the launch site and some of the landmarks of the video? Of course! As long as you have the time when the drone flew over the landmark, you can bounce it off the logs to get the speed. Let us imagine doing the exact same labor intensive process as we did above, but for different lengths of time. Instead of getting the distance traveled in three minutes, let’s try half a minute, two minutes and so forth….times that correspond to our drone flying over the landmarks. How far did our drone travel to reach them? 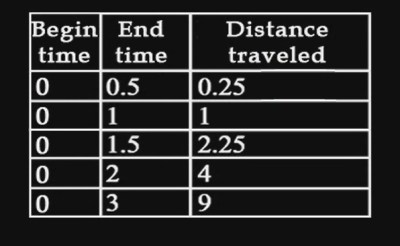 The pattern is obvious. For the given function f(x) = 2x, the integral is x2. If you recall from our last article in this series, the derivative of the function f(x) = x2 is 2x. Now we see how they are inverses of each other. It will be the relationship between these two fundamental principles of calculus, the derivative and the integral, that will be the subject of the next article.

All images are from The Teaching Company course, Lecture 3.