There are three things we will never escape: death, taxes, and an increase in the net amount of entropy in the universe. You can’t cheat death, and you can’t run away from the tax man, but these devices — these Power Harvesting devices — allow us to decrease the entropy in a small area. They preserve order in the Universe. These projects are the only thing stopping us from falling into an existential depression. They’re that good.

Let’s take a look at some of these projects.

If you want to harvest random energy fluctuations in your house, where would you start? You might think about putting a solar panel next to a window, or a windmill on your roof, but you’d be wrong. Your microwave is a leaky faraday cage filled with angry photons. You can harvest that power, and that’s just what [Jurist] did with his project, the mWessenger.

The mWessenger is a tiny board designed to mount to the front door of a microwave. There’s a small antenna on board that will harvest the microwave photons that make it out of the faraday cage, and a boost circuit to turn these photons into usable power. What’s the use of a device like this? There’s plenty! [Jurist] has the idea of creating an Internet of Microwave Notifiers, powered by leaking microwave radiation, that will tell you when your popcorn is done. Of course, you could always put the mWessenger next to your WiFi router and get a notification when the network goes down. 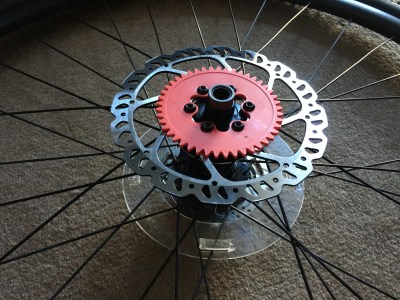 But maybe you don’t want to harvest energy from a microwave. Maybe you’d like to capture some of that entropy you produce? Check out [Javier Betancor]’s imPulse, a device meant to harvest power while you’re riding a bike.

The usual experience of harvesting power from a bicycle while it’s moving is a tiny little generator pressed up against the wheel, ostensibly to power a bike light. These are terrible, and not just because they don’t work well — if you want to do anything with modern electronics like run an LED strip or charge a smartphone, you’re going to need some power handling circuitry.

That’s where [Javier]’s project comes in. He’s using off-the-shelf brushless motors and a chain to tap power directly from the rear wheel. Think of it as a small-scale regenerative braking system, all tied up into an awesome project. The motors [Javier] is using can easily generate a few dozen Watts of power, making this more than enough for running some high-efficiency lighting or charging some electronics. 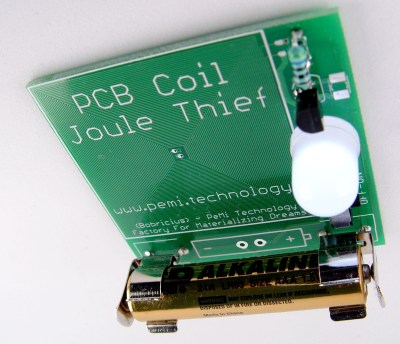 There are too many ways of eking out the most power from a battery, but our favorite has to be the Joule Thief. This is a simple circuit made out of a transistor and a big ‘ol inductor that will run a battery dead flat. If you attach an LED to the circuit, it’s a fantastic way to keep using those ‘dead’ batteries for months and months.

[bobricius] has been working with PCB coils for a while, and if there’s one thing about PCB coils, it’s that they make very large, very inefficient inductors for your circuit. They’re also a ton of fun to design. That’s what led [bobricius] to create the PCB Joule Theif. It’s huge, it’s impractical, but it is a fantastic educational tool. Here, rendered in copper traces and fiberglass substrate is an inductor and an entire circuit there for inspection. It’s awesome.

This is Your Chance to Enter the Hackaday Prize

These twenty entries in the Power Harvesting Challenge have already won $1000, and they’re on the way to the final round of The Hackaday Prize where they’ll be in the running for the Grand Prize of $50,000.

The Hackaday Prize isn’t over, though, and right now we’re in the middle of the Human-Computer Interface Challenge. We’re looking for astonishing and innovative devices that serve as an interface for humans to talk to machines or machines to talk to humans. This challenge runs until August 27th, and twenty entries from this challenge will each win $1,000 and a shot at the grand prize. There’s still time to win your place among the hardware greats, so start your Hackaday Prize entry now.