The Hackaday Superconference is in full swing, and in addition to the greatest hardware hackers, a great gathering of tinkerers, awesome talks, badge hacking, and so much more, we’ve also got competitive soldering. This year, we’re making soldering competitive with the SMD Solder Challenge. It began Friday morning as hackers go heat to head, hand soldering frustratingly tiny parts.

The rules are simple: you’re given a light, a magnifying glass, some solder, wick, flux, and the standard Hakko soldering iron (with the standard tip). The task is to solder up our own special version of the SMD Challenge Kit from MakersBox that includes an SOIC8 ATtiny85 to drive LED/resistor pairs in 1206, 0805, 0603, 0402, and 0201 packages. Scoring is based on time, completion, functionality, neatness, and solder joint quality. May the steadiest hands and sharpest eyes win. 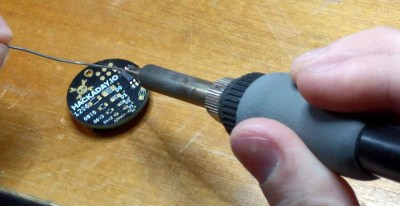 Already, we’ve gone through a few heats of the SMD Soldering Challenge where six hackers sit down, are given five minutes of inspection time, and then whip out their irons. All of this is run by our very own [Al Williams], who serves as the ultimate arbiter of what good soldering is. It’s an amazing competition, and if you don’t think 0201 packages are hand-solderable, you haven’t seen the attendees at the Hackaday Supercon. The top times, by the way, are between 20-30 minutes to complete the entire challenge, with [Sprite_tm] currently at the top of the leaderboard.

You can check out all the talks from the Hackaday Superconference over on our live stream, where we’ll (eventually) be announcing the winners of the SMD Soldering Challenge and the winners of the badge hacking competition later on. Don’t miss the announcement of the winner of the 2018 Hackaday Prize later on this evening!

Kapton tape and tweezers at work

20 thoughts on “Competitive Soldering Gets Heated At Hackaday Superconference”