Among the projects on display was this low-power Tesla coil, happily making small sparks, turning on CCFL bulbs in its immediate vicinity, and generating a bit of plasma too.

There was a learn to solder workshop for attendees to join in anytime and produce artful dead-bug style transistor multivibrator circuits. 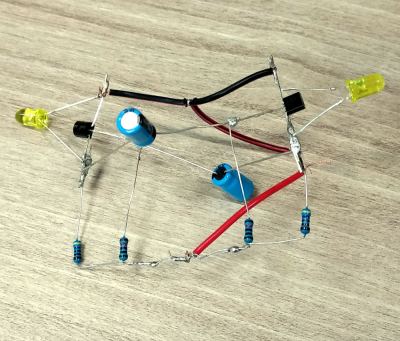 Many of you will be familiar with the astable multivibrator circuit seen here as a popular introduction to electronics and soldering. But if you’re not, it’s a good place to start as you’ll learn about several different components, and the result has blinking lights… while leaving your Arduino free to be used in other projects! Someone had also brought in a bit of a show-and-tell on using GSM modules here.

Next there was a workshop where rover-style robots were built from a locally developed STEM education kit called GaraStem. Fundamentally, it’s a tacklebox filled with instructions, laser-cut chassis parts, an Arduino compatible board and sensors, and an Android control application for your smartphone. It looked easy and fun to work with, and I wish that STEM robot kits like this were available when I was a kid. I can’t help but feel a little jealous – all we had in my area when I was in high school was the occasional science fair!

Of course, any time more than one remote controlled robot is in the same place, a race is necessary and we got right to that. Entirely by coincidence, the floors were painted in a way that sort of looked like a racetrack.

Besides the projects and workshops, there was a track of talks from local companies on what they’ve been up to. One of them, called Indruino, designs their own Arduino boards for use in industrial environments, along with all the bells and whistles that requires. They had a good demo of a speed controller for a 3-phase motor, and talked about what they’ve done to make the platform suitable for industrial use. 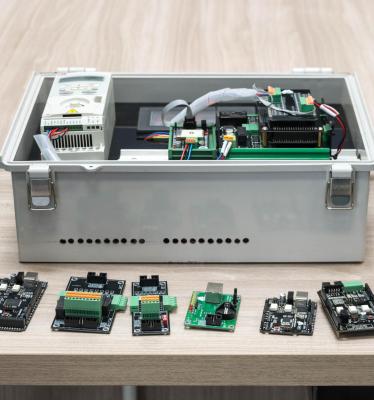 At the very least, I could tell that their boards made ample use of optoisolators, secure connectors, and high quality shielded DC-DC converters. According to their pamphlet, they’ve already deployed in a number of factories, with industrial touchscreens and a freeze-drying system controller — not surprising as freeze dried foods is an industry that has really been taking off in Vietnam the last few years and designing what you can locally is a good move.

Vulcan Augmentics, a local startup that designs modular prosthetic limbs was there to present their work on practical human-machine interfaces. For a variety of reasons, there are quite a few amputees of all ages in Vietnam, and so any effort to better serve them is certainly appreciated. Unfortunately, their prosthetic limbs were either overseas or in use at the time, so I couldn’t examine the hardware. Nonetheless, it’s a nice example of how the skills we learn as a hobby can one day develop to the point where we can make a positive impact on another person’s life.

I presented some IoT use cases and demos, many of which I’ve written about here, along with some notes on the importance and implementation of security such as MQTT with either AES or TLS. I also talked about ways to define reliable failure states for IoT devices in case of loss of connectivity. While it’s an extreme example, you can’t have a large robot plow into a wall because the last command received before a connection loss was ‘go forward’! Of course, there exists the argument that we shouldn’t be connecting dangerous robots to the Internet frivolously in the first place, but it’s not very interesting and the lessons in control systems still apply. It was good fun and no robot, human, or architecture was harmed.

Even the Cake was High Tech

At the end of the day, there was the requisite cake (strawberry jam). The local bakeries have something like a type of marzipan sheet that they can print on at a surprisingly good resolution, and the cake featured some pretty good imagery as a result.

The event wrapped up with a trivia competition, with some kits that had been donated as prizes for the highest scores.

Overall the sense of community at the event was strong, and despite the fairly high attendance it was well organized. My hat is off to Fablab Saigon for putting it together.