If one could temporarily remove their sense of humor and cast a serious look into a Rube Goldberg machine, they would not say to themselves “well that looks simple.” Indeed, it would almost always be the case that one would find themselves asking “why all the complexity for such a simple task?” 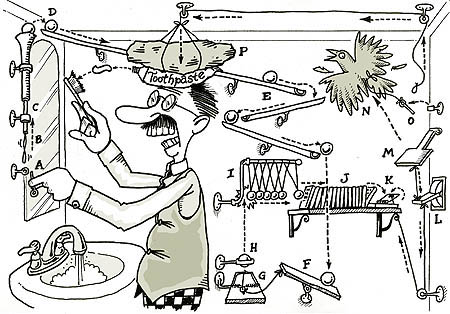 But imagine approaching a hack as simply a means to an end. Imagine if you did not have all of that knowledge in your head. All of those tools at your disposal. How would this change your approach? When [yavin427] decided to automate the leveling up process in his favorite video game, odds are he had never taken a game controller apart. Had never touched an oscilloscope. Indeed, he might have no knowledge of what a transistor or microcontroller even is. While many of our readers would have taken the more difficult path and tapped directly into the TTL of the controller to achieve maximum efficiency; it is most likely that [yavin427] would not have known how to do this, and thus would not have seen the many other paths to his end goal that would have been obvious to us. Yet he achieved his end goal. And he did it far easier and with less complication than many of us would have done.

Thanks to [euqinimod] for the tip! Keep them coming!