One can be reasonably certain that when the title of an article includes the phrase “The Nature of Reality”, thought provoking words must surely lie ahead.  But when that same title seems to inquire about a gentleman’s socks,  coupled with an image of said gentleman’s socks which happen to be mismatched and reflect very loud colors , one might be moved in a direction which suggests the article is not of a serious nature. Perhaps even some sort of parody.

It is my hope that you will be pleasantly surprised with the subtle genius of Irish physicist [John Bell] and his use of socks, washing machines, and a little math to show how we can test one of quantum physic’s most fundamental properties. A property that does indeed reside in the very nature of the reality we are a part of. Few people can say they understand the Bell Inequality down to its most fundamental level. Give me a little of your time, and you will be counted among these few.

A Question That Changed Everything

First, we need a brief trek through history. Our story begins not very long ago, but in a galaxy very, very far away. A lonely electron exists in an unknown state in our distant galaxy. I say unknown because we can’t know. The galaxy, and hence the electron is several million light years away. [Einstein’s] special theory of relativity puts a limit on how fast information can travel, making it impossible for us to know anything about the current state of the electron. [Einstein] doesn’t know, 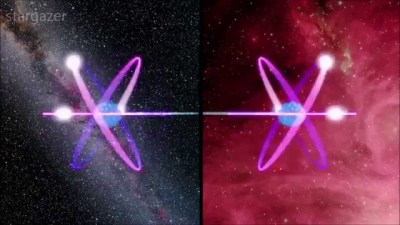 There is no way around it…quantum theory does allow for this mysterious property of our reality. [Einstein] said it violated his relativity theory and its cosmic speed limit. A theory that has been proven beyond any doubt to be correct. How can this be? Which theory is right? [Einstein] proposed an alternative theory that would satisfy the paradox. He used what are known as local hidden variables, which you can catch up on in my first discussion of Bartlmann’s Socks.

Basically, it says the spins of the two electrons are predetermined. But this is not compatible with a core principle of quantum theory, which says the spin of the electrons cannot be known until a measurement is made. And thus a great battle was born, with the victor earning the right to define the nature of reality. Unfortunately, [Einstein] and [Niels Bohr], who was leading the charge for quantum theory,  would not live to see the end of the battle. Fast forward a few decades and you come to a point in history where [John Bell] puts an end to the argument with the mother of all weapons – a pair of socks. 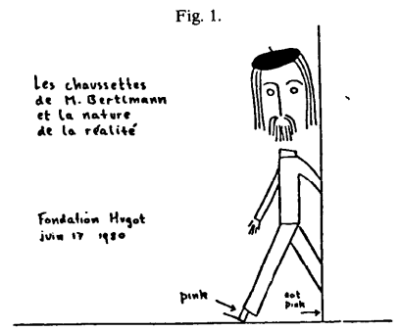 [Dr. Bertlmann] is known for wearing mis-matching socks to the lab. As his left foot enters through the door, you see that his sock is pink. Knowing what you know about Dr. Bertlmann], by observing the pink sock on one foot, you can derive information about the sock on the other. When you see a pink sock, you can say with absolute certainty that the other sock will not be pink.

Let us borrow [Dr. Bertlmann’s] socks for some testing. We’re going to see how they hold up to prolonged washing at different temperatures. We’ll take the left socks and subject them to washing at three different temperatures. Let’s label the left socks “A” and the three temperatures “a“, “b” and “c“. We’ll wash each sock for the same length of time and then observe the results. Socks that are intact will be labeled “+” and socks that are destroyed will be labeled “–“. Note that for this experiment, the temperature of the water and the time of washing are not relevant.

This headache inducing equation can be broken down as such: On the right side of the equal sign are the subsets and on the left are the sets. We went over how to get these subsets from the sets in the above paragraph. What we’re interested in is the two middle subsets.  This is n(a+, b–, c–) + n(a+, b+, c–) which yields set n(a+, c–). How does this work from a math perspective? This is after all, an equality. You can’t fit n(a+, c–) on the left side of the equation. It doesn’t work. We can therefore conclude that:

Now, the observant reader will have realized that if a sock is destroyed at temperature a , it cannot be available for tests at temperature’s b or c. Let us not forget that [Dr. Bertlmann] had two feet, and socks come in pairs. They might be different colors, but their physical characteristics are considered to be the same. Such that the outcome of the tests on the left sock can be used to predict what the outcome will be for the right sock.

Consider the chart below.

As you see, each experiment will test each of our socks at two different temperatures. For Experiment One, sock A will be subjected to temperature a and sock B will be subjected to temperature b. Then we will focus on the number of pairs of socks for which sock A survives (labeled ‘+’) and sock B is destroyed (labeled ‘-‘), which will be denoted as set N+-(a,b). The next point is key to understanding why we’re doing the test in this fashion.

During the hypothetical test, we realized that set n(a+, b–), which is the sum of subsets n(a+, b–, c+) and n(a+, b–, c–), cannot be accurately tested because socks destroyed at temperature b will not be available for test at temperature c. In our real world experiment, we will substitute in the other half of the pair when this occurs.  By doing this, we can say that the number N+-(a,b) must be equal to our hypothetical number n(a+, b–).

The law of substitution tells us that the sum of sets N+-(a,b) and N+-(b,c) must be greater than or equal to set N+-(a,c). If we apply our logic in a generalized form as a sum of probabilities, we get:

This, ladies and gentlemen, is Bell’s Inequality. Take a look back at part one, and replace pairs of socks with entangled atoms, washing machines with magnets and temperatures with magnet orientations, and you have the same thing – the Bell Inequality. Let’s run some numbers so you can see what all the fuss is about.

Applying these values to the inequality would yield:

The numbers are obvious. The predictions from quantum theory violate the Bell inequality. There is no getting around it. Remember, the angles of the magnets are represented as the temperature of the wash water. It doesn’t matter at what temperature we wash our socks, the sum of sets N+-(a,b) and N+-(b,c) must be greater than or equal to set N+-(a,c). Likewise, the same can be said for the angles of the magnets and atomic spin. From part one you learned how we use the angle of the magnets to determine if the spin of the atom is up (+) or down (–), which is analogous to a sock that survives or is destroyed. By changing the angle of the magnets and looking at probabilities for different spin outcomes, we can subject the paradox to an actual, measurable experiment. [John Bell] has given us the ability to perform a real world test to see who is right – [Einstein] and his hidden variables or [Bohr] and his quantum theory.

When [Bell] put forth his inequality (pdf) to the scientific community on July, 18th 1980, the technology to actually carry out such a test was not yet in reach. But it was close. In 1982, French physicist [Alain Aspect] made it his thesis to carry out such a test. While the results leaned toward the direction of quantum theory, there were still loopholes that kept [Einstein’s] hidden variables on life support. But as technology caught up, the loopholes were eventually closed, giving quantum theory the winning hand.

41 thoughts on “What Do Bertlmann’s Socks Mean To The Nature Of Reality?”