Why Does it Dip? 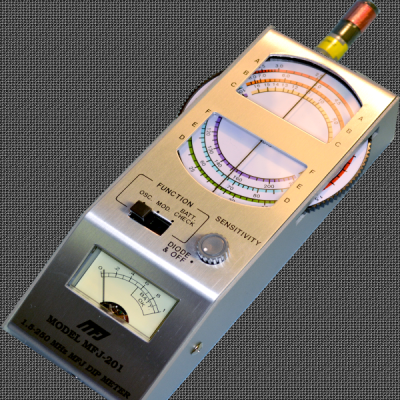 Regardless of what you call them, the theory of operation is the same and it is pretty simple. The instrument is nothing more than a very broad band oscillator with a way to couple the output to an external circuit. There will also be some way to monitor how much power is being taken out of the oscillator. This is most often done by looking at the peak amplitude of the oscillator.

The reason for the dip has to do with the way inductors and capacitors behave at different frequencies. Just about any circuit or component has three sources of impedance: the resistance, which shouldn’t change based on frequency; the capacitive reactance, which is due to–of course–capacitance; and the inductive reactance from inductive elements. In some cases, you only have a significant amount of one of these. For example, in a carbon resistor, you shouldn’t have very much of either type of reactance. A capacitor should be predominantly capacitive reactance.

In the example, then, 22+32=13. The square root of 13 is just around 3.6, so the magnitude of the impedance is 3.6 ohms. To complicate things further, inductive reactance and capactive reactance tend to cancel each other out. It is customary to treat capacitve reactance as negative, although since we will square it, it really doesn’t matter which one you consider negative to do this particular calculation. For the math inclined, you are really treating the resistance as the real part and the reactance as the imaginary part of a complex number. The conversion to polar form gives the magnitude and the phase angle.

The point where the reactances cancel each other out is resonance. The dip meter works because at the resonance point, the meter’s oscillator will have the highest load on it (lowest impedance), and thus the voltage will drop (or dip). At any other frequency, some reactance will be left and the total impedence of the circuit under test will be higher than at resonance.

Clearly, the most basic function of the dip meter is to measure the resonant frequency of a circuit. If that were all there was to it, it would be pretty useful. But with just a little extra effort, the dip meter can do so much more.

What Can you Measure?

First, it can also measure other tuned circuits, not just capacitors and inductors made from components. For example, antennas, crystals, and transmission lines can all have a particular resonance points, and the meter can measure them. For a crystal, the frequency is the one the crystal should oscillate at (with a little error based on loading capacitance and other factors). Antennas may be resonant at more than one frequency, not just the one you are interested in, so some judgement is required. Anything that doesn’t have a coil (like an antenna or a crystal) will need a little wire loop to couple energy from the meter to the circuit.

Of course, you can use the transmission line relation either way. That is, you can get the resonant frequency to measure the cable, or you can set the frequency and trim the line for a dip. In fact, using what you know to get what you don’t know is generally a good principle with the grid dip meter. Want to measure an unknown capacitor? Resonate it with a known inductor. Or start with a known capacitor and find the value of an unknown coil.

If you don’t mind a little estimation, you can do even more measurements. Coils have a Q (quality factor) that indicate how much resistance they have relative to their reactance. Using a good reference capacitor, form a resonant circuit and dip the meter. Note the frequency. Then tune the dip meter down until you find the frequency where the meter reads about 30% higher than it did at the dip. Now tune the dip meter up, through the dip again, until you find the 30% mark again on the other side. The Q will be roughly equal to the dip frequency divided by the difference between the two 30% frequencies.

It might be obvious, but the dipper can also just be used as a signal source. For example, to repair a radio, you might put the dip meter at a frequency the radio should be able to hear and trace it through the circuit. Many dip meters also have a mode where they will turn off their oscillator and use the coil (and tuning capacitor) along with a diode to act as a wavemeter. The meter, then, shows the strength of RF energy at the tuned frequency. Some meters even have a headphone jack so you can listen to the signal (making it almost a crystal radio). 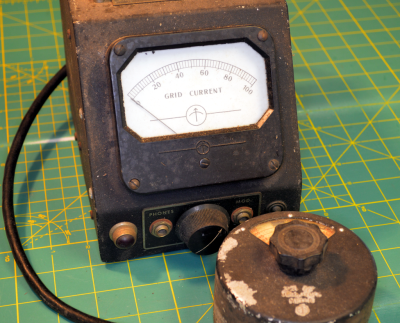 One reason many people don’t have dip meters today is that they aren’t as readily available as they used to be. Heathkit was a very popular supplier for dip meters and had several models. Other popular older models (often found on eBay) were Eico, Millen, Boonton, and Measurements Corporation (be careful, though; the ones with tubes are probably not a good deal unless you are a collector). You can find a list with pictures of many GDOs at [n4xy’s] web site (the pictures are a few clicks of the next button away from the main page). To the left is a picture of one of my old Measurements GDOs (and, yes, it does use tubes).

You can still find new dip meters from MFJ (they sell the MFJ-201 shown on the right, and you can also convert some of their antenna analyzers into a serviceable dip meter). There are also plenty of plans on the Internet. If you want a real tube model (not recommended) [w4cwg] has plans. A more modern FET design that has a novel bridge to help make the dip deeper is available from [SM0VPO]. 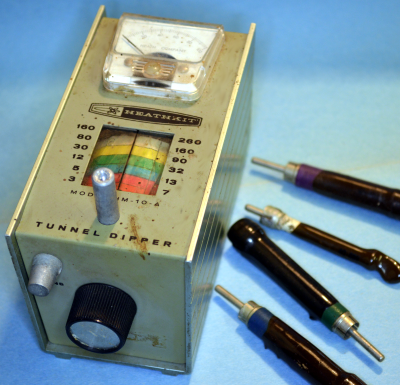 On the other hand, it seems a shame to build a new unit without a digital display. You can add one, of course, or you can go with one that is integrated like the DipIt or the ELM. There are plenty of other project and even kits out there. Look around. The hardest part, usually, is winding the coils, although some will call for variable capacitors that may be hard to match. Really, though, any oscillator that can be made stable will work. In fact, I have two old Heathkit dippers that use a negative resistance tunnel diode as an oscillator (one of them is in the picture to the left).

If you want a video demonstration of using a dip meter, I couldn’t do better than [w2aew] already did, so you can find his video below.