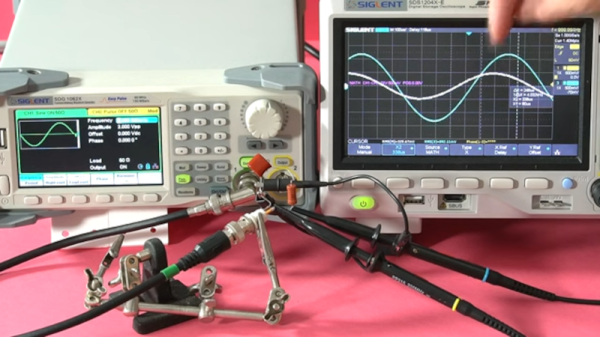 We always enjoy a [FesZ] video and we wonder if the “Z” stands for impedance? That’s the topic of his latest video series: measuring impedance with LTSpice. Of course, he also does his usual thorough job of mapping the virtual world to the real one. You can see the video below.

It is simple enough. Impedance is very similar to resistance. That is to say, we have a ratio of voltage and current. However, since it is an AC quantity, you need a complex number to represent it and there is an associated phase shift.

END_OF_DOCUMENT_TOKEN_TO_BE_REPLACED

People are well aware of the power of virtual machines. If you want to do something dangerous — say, hack on the kernel — you can create a virtual machine, snapshot it, screw it up a few times, restore it, and your main computer never misses a beat. But sometimes you need just a little shift in perspective, not an entire make belive computer. For example, you are building a new boot disk and you want to pretend it is the real boot disk and make some updates. For that there is chroot, a Linux command that lets you temporarily open processes that think the root of the filesystem is in a different place than the real root. The problem is, it is hard to manage a bunch of chroot environments which is why they created Atoms.

The system works with several common distributions and you install it via Flatpak. That means you can launch, for example, a shell that thinks it is running Gentoo or Centos Linux under Ubuntu.

END_OF_DOCUMENT_TOKEN_TO_BE_REPLACED

You can write a Python program or use a Jupyter Notebook to do almost anything. But you can also get a lot of things done quickly using a spreadsheet. Grist is a “hacker’s” spreadsheet that merges these worlds. It looks like a spreadsheet, but underneath are SQLite tables and the formula language is Python.

The code is open source and if you want it hosted, there are free and paid plans. You can even try it out without even logging in and either start with a blank screen or use a template. You can see an introductory video below.

END_OF_DOCUMENT_TOKEN_TO_BE_REPLACED 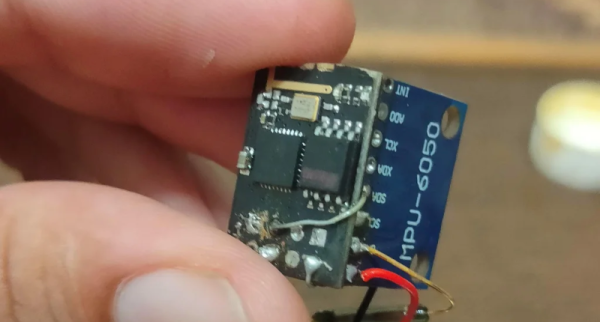 It is a pretty stale dad joke to tell someone you have ESP when you mean you have an ESP8266 or ESP32 in your hand. However, [Naufil Metkar] uses an ESP device to pretend — via a magic trick — that he does have ESP. The trick requires a bit of 3D printing, an MPU6050 gyro sensor, and a lot of showmanship.

We hate to spoil an illusion, but you can probably figure it out from the list of things you need. The die has a gyro in it and uses a small ESP module to transmit its current orientation out to a display. There is a small reed switch that lets you turn off the device with a magnet. Without it, the battery dies quickly.

END_OF_DOCUMENT_TOKEN_TO_BE_REPLACED

We know. The title sounds like a bad newsreel from 1942. Turns out, though, that the Nazis were really good at pouring money into military research and developing — or trying to develop — what they called “wunderwaffe” — wonder weapons. While we think of rockets and jets today as reasonably commonplace, they were state-of-the-art when Germany deployed them during WWII. While the rockets were reasonably successful, the jets were too few and too late to matter. However, those were just the tip of the iceberg. The German war industry had plenty of plans ranging from giant construction to secret weapons that seem to be out of the pages of a pulp science fiction magazine.

Part of the plans included huge ships including one aircraft carrier displacing 56,500 tons. Many of these were never completed and, in some cases, were never actually started. In contrast, the Essex-class USS Hornet displaces 31,300 tons and the Lexington was 37,000 tons. The H-class battleships would have had as much as 140,000 tons of displacement dwarfing the Yamato class (73,000 tons) and the Iowa class (53,000 tons).

END_OF_DOCUMENT_TOKEN_TO_BE_REPLACED 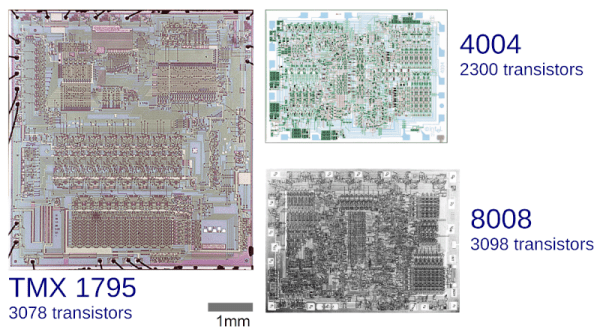 Texas Instruments isn’t the name you usually hear associated with the first microprocessor. But the TI TMX 1795 was an 8008 chip produced months before the 8008. It was never available commercially, though, so it has been largely forgotten by most people. But not [Ken Shirriff]. You can see a demo from 2015 of the device in the video below, too.

The reason the chips have the same architecture is they were built to replace the same large circuit board inside a Datapoint 2200 programmable terminal. These were big beasts that could be programmed in BASIC or PL/B.

Datapoint asked Intel to shrink the board to a chip due to heating problems — but after delays, they instead replaced the power supply and lost interest in the device. TI heard about the affair and wanted in on the deal. However, Datapoint was unimpressed. The chip didn’t tolerate voltage fluctuations very well, since they had replaced the power supply and had a new CPU design that was faster than the chip would be. They were also unimpressed with how much stuff you had to add to get a complete system.

So why did the Intel 8008 work out in the marketplace but the TI chip didn’t? After all, Datapoint decided not to use the 8008, also. But as [Ken] points out, the 8008 was much smaller than the TI chip and, thus, was more cost-effective to produce.

As usual, [Ken]’s posts are always interesting and enlightening. He’s looked at a lot of old computers. He’s even dug into old space hardware. Great stuff!

END_OF_DOCUMENT_TOKEN_TO_BE_REPLACED 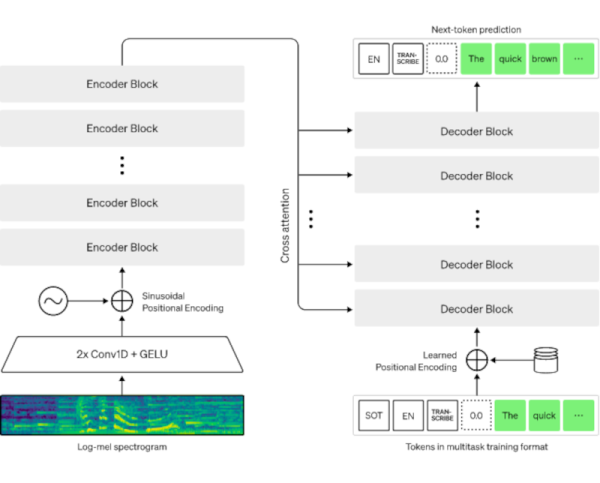 Should you wish to try high-quality voice recognition without buying something, good luck. Sure, you can borrow the speech recognition on your phone or coerce some virtual assistants on a Raspberry Pi to handle the processing for you, but those aren’t good for major work that you don’t want to be tied to some closed-source solution. OpenAI has introduced Whisper, which they claim is an open source neural net that “approaches human level robustness and accuracy on English speech recognition.” It appears to work on at least some other languages, too.

If you try the demonstrations, you’ll see that talking fast or with a lovely accent doesn’t seem to affect the results. The post mentions it was trained on 680,000 hours of supervised data. If you were to talk that much to an AI, it would take you 77 years without sleep!