Dual extrusion 3D printers are not as uncommon as they used to be, but there are still a lot of single-extruder machines. [Paul Lang] wanted to refit his printer to take two MK8 extruders, and he documented his experience with a blog post that has a few good tips if you want to try it yourself.

[Paul] used Fusion 360 to design a holder for the extruders that would fit his printer. Since he had accidentally ordered a spool of pink PLA, the whole assembly is shocking pink — not subtle at all. He shares a few design tips about using PLA near the hot areas and making everything fit and level. 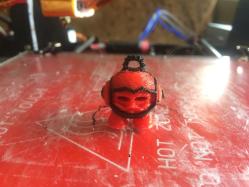 The results speak for themselves (see right). [Paul] says he still needs better offset calibration and he isn’t quite happy with the head changeover in the G-code. Still, the resulting prints look pretty good.

[Paul] did you an existing design for the Prusa-style backplate, and your printer might be different anyway. So his post is less of a how-to and more of the steps he took and the difficulties he had to work through. Your hacked printer will probably vary.

If you don’t want to do the work, you can just lie and say you did. That actually can fool the printer. Either way, if you need help creating multicolor models, we covered that earlier.