There was a time when hackspaces were few and far between — legendary environments that you’d read about online, where amazing projects were made by people who had come together to form communities of creative technology enthusiasts. Of course, they were always in places far afield, California, or Germany, never in provincial England where I call home. Eventually our movement spread its tentacles into the county towns, and several years later with a stint as a hackspace director behind me I sense that it is on the cusp of escaping its underground roots. Every month seems to bring news of yet another organisation wanting to open a makerspace of their own, be they universities, co-working spaces, enterprise centres, libraries, or even banks. It’s evident that our movement has attracted an aura of edginess when it comes to getting things done, and that these entities are anxious to secure a little piece of that for themselves.

So within a few miles of most hackspaces will be several places where you can find a 3D printer, maybe a vinyl cutter, a CAD workstation, and a soldering iron. There will be a fancy hipster coffee machine and some futuristic furniture, and probably some kind of enclosed meeting pod of dubious design. All of which can no doubt be viewed through a glass wall, so that people in suits can watch all that raw #innovation sizzling away.

Viewed from within the movement, it’s easy to see all this activity on the edges of the world of making as a threat. A struggling community organisation survives on its wits alone, it doesn’t have a multi-million pound (or dollar) university or investor behind it. Its tools are hard-won and patched up, and its coffee machine is a battered electric kettle and a jar of supermarket instant coffee. When it comes to gleaming innovation spaces, a group of assorted makers simply can’t compete. Surely the arrival of these spaces will tempt members away, and the hackspace will inevitably wither, and die. 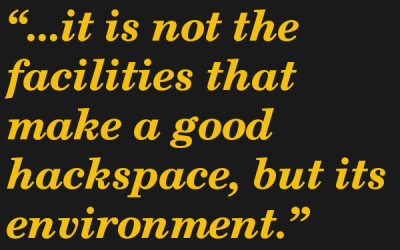 At this point I’m going to say something that might sound odd to a hackspace denizen: a good hackspace doesn’t need a 3D printer. Neither does it need a laser cutter, a mill, an electronics workstation, or a textile room. A good hackspace will almost certainly have most of those and more, but the point I am trying to make is that it is not the facilities that make a good hackspace, but its environment. What makes a good hackspace is the coming together of minds from all directions in a truly diverse and inclusive community, the sharing of off-the-wall ideas that sometimes turn into much more than just idle chit-chat. From these come amazing projects, collaborations, and commercial ideas. That’s real innovation, and it’s something that can’t be bought with a budget for shiny tools alone. From our off-topic chatting behind the scenes for example, I often think that my Hackaday colleagues would make the nucleus of a truly astounding hackspace. You probably have the same ideas about a group of people you know, if only we were all in the same city, and had access to a well-equipped lock-up!

By contrast, the hackspace competitors are a very different proposition. The unfettered nature of a traditional community hackspace is alien to many commercial sponsors, it is something they don’t fully understand, and are thus wary of. Activities which seem normal to a hackspace crowd are distinctly off-message to them, particularly those with a community bent rather than with a focus purely on business. Thus their take on a hackspace is invariably a sterile office-hours one, which may have the shiny tools but is short on the secret sauce.

It’s something then that we should all bear in mind as we sit in our hackspaces and watch these commercial competitors setting up around us. Will they eat our lunches, or are they no threat to us? If you’ve made it this far you’ll probably guess that my view has them as less of a threat than you’d imagine. They invariably fail to capture what makes a hackspace special, and while all hackspaces will have a few members who might find a home in them, they aren’t really performing the same function. It is inevitable that these spaces will continue to appear, and while many of them will close through lack of use there will be a few that achieve permanence. You might not expect me to say this, but if that turns out to be the case then it’s a good outcome. While the people using commercial spaces to make things are different from the hackspace crowd, they are still making. And that’s what it’s all about really, isn’t it.

Jenny List is a member of both Milton Keynes Makerspace, and of Oxford Hackspace.