Old-school handheld gaming platforms have a certain charm, but it’s fair to say that their relatively tiny screens don’t lend themselves to wider viewing. This presented a problem to [uXe] who wanted to display Arduboy games on the big screen, so he took a MyStorm BlackIce FPGA board and created a converter that emulates a SSD1306 OLED display and has a VGA output. 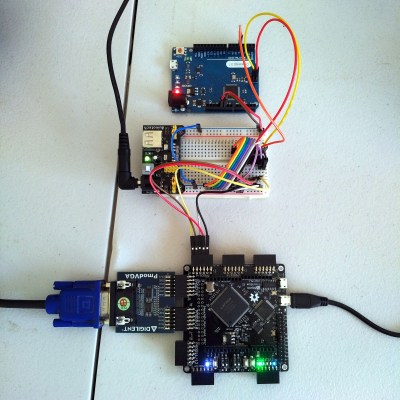 Having proved the viability of the idea, it was ported to a dedicated PCB with onboard ancillaries such as a level shifter for a 5 volt input. In an exciting twist, with a few modifications it’s also emulated a GameBoy screen, allowing full-sized playable games from that platform too. But the power of this hack isn’t relegated to gaming. SSD1306 is just one of a few different common standards for embedded displays. The FPGA work in this project is the blueprint for building a VGA adapter for any number of display replacements. We’d love to see an HD44780 mod of this!

The result as you can see in the video below the break is very much more in the spirit of the OLED than an HD immersive experience. But it does have a very pleasing air of an older arcade machine about it.

Several projects starting on a MyStorm BlackIce board have made it here in the past. Pretty memorable is the BBC Micro clone using one.