In 1999, the US passed the American Inventors Protection Act, acknowledging that the vast majority of inventor services companies were ineffective or fraudulent, and putting in place reporting requirements that ensure people are well informed when engaging with these companies. They are required to disclose how many inventions they’ve evaluated and accepted, their total number of clients, the number that have received a net profit after their expenses to the company, and their licensing success rate. Go to any inventor services web site and look for their numbers. After an extensive search, though, we only found a couple that actually listed the data, and it wasn’t good.

The biggest takeaway of this article should be this; as an entrepreneur you have limited resources available, and nearly unlimited ways to spend them. You should choose to spend those resources only on the things that will get you to the next step, not things that are way out in the future, and not on things that you can do yourself. Don’t pay for a fancy trade show booth if you don’t have a product to show. Don’t pay someone to develop a proof of concept if you can hack something together with an Arduino and cardboard. Be absolutely certain you know what you’re getting for your money, and that you need it in order to get where you want to go.

Every time I’ve gotten a trademark or patent, I’ve discovered that it was issued when the flood of advertisements came in. A few weeks later, the USPTO delivers official notice, along with a flyer warning of official-looking scams that try to solicit my money. If you decide to register a trademark, you get the benefit of using the R symbol instead of the TM symbol. Nice, but make sure it adds value to the business.

The solicitors will be of two varieties; those wanting you to register for their special listing service, and those wanting you to buy their trademark maintenance services. The former means that you would give them a large sum of money, and they put your trademark in their database. Their database isn’t really used for anything, and you don’t get any additional protection by paying for inclusion; it’s just a way to give someone else your money.

The other solicitation is mildly valuable; they’ll monitor new applications for similarity to yours, then notify you or file objections during the public listing period. Every trademark application must be listed in a public forum for a period of time for public review before it is accepted. If there aren’t any complaints, it is accepted. If someone files a trademark application that makes it past the review clerks and is publicly listed but similar to yours, you can file a complaint and they’ll do some more review of the new application before it’s issued or rejected. In addition, five years after receiving your trademark, you must file additional paperwork with the USPTO letting them know that you’re still using it. Some companies offer to help with this, but it’s a quick and easy form; if you filed the trademark yourself then you don’t need help renewing it.

Registering a patent is tricky, and pretty much requires help from a lawyer, who will take your documentation and turn it into a jumble of legalese that you barely recognize. This is an unfortunate state of affairs in our patent system, but it’s the way it is. You can file a provisional patent, however, with very little assistance, which buys you a year of protection until you can file a formal patent if you decide your idea is really worth protecting.

Before you dedicate the next few years of your life to pursuing your idea, you should figure out if there’s a real business potential, and decide on your plan for making it happen. This is where the market research and business plan come in. Yes, you can pay someone else to do this, but why would you? Is the company you’re hiring to do this just putting together a proposal in which you give them more money to execute on their plan? If so, you’re just paying them to pitch to you, and of course they’re going to say the market is huge. This is a process that should be done by you, even if there are other people you can pay to do it. Find a template that you use to fill in the blanks without overlooking something, but the exercise of doing the market research and business plan development is a very personal process that requires a lot of introspection about how you plan to be involved, and how you plan to execute your vision. It’s probably best that you do this yourself.

Explainer videos are popular. Take a concept, throw some kitschy music, a voice actor overlay, and some nice animation together, and you’ve got yourself a video that helps people understand what your product is. It’s cheaper and easier to produce than a live action video or commercial, and more trendy. For some products that are new and complicated, it might make sense to create a simplistic video to train potential customers.

Generating good media is important. You need hero images that show off your product in a good light, that can be used by sales, marketing, and published in magazines. If you don’t have attractive pictures or video, you won’t get attention. Sometimes it does make sense to hire someone local with good equipment and skills that can make your product shine, but always be thinking about what you are getting this media for and how it will be used, and don’t pay for more than you need. Your slightly improved mousetrap isn’t going to benefit from a Superbowl-caliber ad.

Developing an idea from concept to production takes a lot of time and work and expertise and investment, and there are a lot of product development companies, of various size and quality. They won’t all get you to the same place, though. Some focus on generating a proof of concept so you can take it somewhere to get investment. Others are development firms for Fortune 100 companies and don’t have time for the little guys. If you don’t have the skills to take your concept to a manufacturable product, you’ll need to either develop them yourself, or hire someone who does. There’s a great argument for developing it yourself; you’ll become an expert on your product. You’ll be able to experiment with every aspect of its design and assembly. You’ll be able to take it to a factory and know exactly what needs to be done. And you’ll be able to iterate many times and test it for far less expense than if you hired a firm. 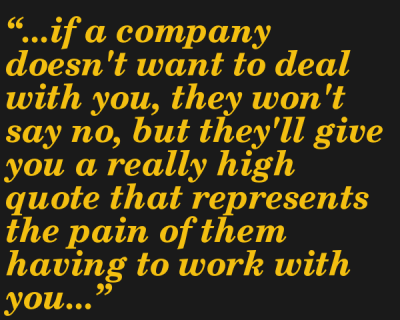 It may also take you a lot longer to learn and develop than it would a team of seasoned experts capable of developing your project in a matter of weeks and spitting out all of the files necessary for tooling and assembly, confident that it will be manufacturable using standard machinery. You can burn a lot of money going this route, too, especially if you only have a concept and the firm needs to do experiments with a variety of designs and features. The best bet is a combination, in which you’ve experimented with most of the feature sets, have a solid idea of the product, and just need them to draft it for production. Also, beware of the buzz-off quote; if a company doesn’t want to deal with you, they won’t say no, but they’ll give you a really high quote that represents the pain of them having to work with you. Acknowledge that this is what it is, and that you probably aren’t the right fit for them, and move on to someone else.

From invention assistance companies, to law firms, to product development companies, there are lots of people willing to take your money on the promise that you will be getting something of value that will help propel your idea into the big leagues. Your job is to sift through it all and decide whether the service being offered is one you really need, and if it will get you where you want to go. The world isn’t a place where you can just have an idea and sell it for millions; ideas are a dime a dozen. The value is in the execution, and the more you can control that execution, and rein in spending so that it can be directed efficiently, the more likely that your execution will be successful. This means doing a lot of things on your own, hiring experts when necessary to do things of limited scope, and devoting your energy to just the things that will move you forward.

20 thoughts on “Inventor Services – Maybe Right For You – Maybe”