A trademark represents a brand, so it can be words like “Apple”, including made up words like “Kleenex”. It can be symbols, like the Nike swoosh. It can also be colors, like UPS brown, and even scents like the flowery musk scent in Verizon stores. Filing a trademark in the United States is surprisingly easy. With a couple hundred dollars and a couple hours, you can be well on your way to having your very own registered trademark and having the right to use the ® symbol on your mark. You don’t need a lawyer, but you should know some of the hangups you might run into. The USPTO has a fantastic primer on trademarks, but we’ll TL;DR it for you.

Knowing If a Registered Trademark Is Right For You

The United States Patent and Trademark Office (USPTO) registers trademarks and issues patents, but it’s not always the best way to spend your money. A patent is only as valuable as one’s ability to defend it, so a startup spending their few resources trying to get a patent doesn’t make sense if they don’t have the resources to sue someone who violates it. The same is true of a trademark. You can bluff your way with Cease and Desist letters, and people might see the trademark and patent and steer clear of it, so it’s not worthless, but it’s also not ironclad protection of your intellectual property.

With trademarks, it’s possible to skip registering entirely but still get protection through the ™ sign. In fact, it costs nothing to use it, and you can sprinkle it liberally on any logo or word mark you create and intend to protect. You can also use ™ up until your ® is registered. The downside is that it’s a ‘common-law’ right and not as strong, so it’s harder to defend. Consider it the equivalent of putting a sign on your fence that says “trespassers will be shot.”

If you’re doing business across the nation, you have some resources at your disposal to protect your ® if needed, and you have a brand that you want to protect, then registering is a good idea.

Filing Trademark: So Easy Anyone Can Do It

The process of filing the trademark involves a few steps. First, and absolutely the most important, is to do some due diligence and make sure you have a high likelihood of success by looking for similar trademarks that have already been registered. The person at the USPTO with the power is going to look at your application, then look for other trademarks that are “confusingly similar.” This is a vague but powerful term, so it’s important to stay away from the gray area. Similarly spelled or sounding names, translations, visually similar logos, all of these are danger zones. 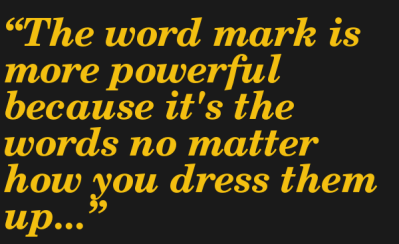 Trademarks are filed by class, which is a way of organizing by general category. This is how you can have Apple Records and Apple Computers coexisting at the same time (in theory). As a brand gets bigger, it has more power, though. It’s unlikely that “Coca Cola Electronics” would be issued, even if Coca Cola itself doesn’t have a registered copyright in that class, because Coca Cola is so big and well known that people would be confused and think they were the same entity. The mess that happened with Arduino’s trademark is exactly what the USPTO is trying to help avoid.

Once you are confident that your money won’t be wasted, there are some hoops you have to jump through to file, but they’re pretty easy. You have to have an owner of the mark, name and address, filing fee, and signature. That’s about 2 minutes of work. You have to pick the goods or services, which is another minute. You have to upload the depiction of the mark. If you are doing a word mark, then this is just typing out what your mark is. Otherwise, it’s an upload of an image, as clear as possible. The word mark is more powerful because it’s the words no matter how you dress them up, so you have more freedom with design. Your mark must be used in commerce, and you must show evidence of this (a screenshot of a web store front works, as long as it has the logo and shows that you’re using it in commerce). Then you click the submit button, review it extra close, and file. It’s usually pretty simple, but it’s the beginning of a 6 month process.

While you wait, you’ll get notified of your progress through advertisements. There will be law firms telling you they can help you with various aspects. There will be random internet registries sending you advertisements that look like invoices for large amounts of money. They will be congratulating you on the registration of your mark. They are mostly scams trying to sucker you out of money, but they will be telling you what your trademark status is before the USPTO gets around to it. It’s weird, but it’s the way it works.

Once you file the form, it’ll take a couple months before the clerk can get to your application, and it will be accepted or they will submit an office action, which can be a request for clarification if you mess up the paperwork, or they’ll decline the application if it violates an existing trademark. If accepted, it gets put into a public notice, and the public has some time to file a complaint. If your application gets through the public notice without any complaint, then you are issued the registration. If you did it right from the beginning and there isn’t any doubt about your rights to the trademark and no likelihood of confusion, you don’t have to do anything but wait.

After you get the flood of email and snail mail telling you, you’ll get an official notice from the USPTO that you have successfully registered your trademark. Congratulations! At this point you can start using the ® symbol on your mark. Technically (according to the lawyers at least), you’re supposed to use this anywhere your mark is used. Realistically, that comes across as pretentious and silly, so it’s acceptable to use it in the big important places and not so much elsewhere. 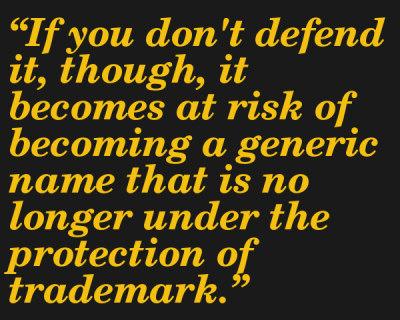 With your fancy new registered trademark, you can now prevent others from doing stuff that would violate your mark (and get treble damages for violations), like keep someone from importing 2000 multimeters because they have a dark face and yellow border. If you don’t defend it, though, it becomes at risk of becoming a generic name that is no longer under the protection of trademark. That’s what happened to Kleenex, and it’s at risk for Google — if you use google like a verb to mean to search regardless of which search engine, you’re contributing to the dilution of Google’s registered trademark. Xerox had a large campaign to encourage people to use the term photocopy instead. If you don’t defend your trademark against  ALL violators, you risk losing it as well. This is why Disney is such a stickler, and why the Velcro company sent us a cease and desist for our (recently renamed) article on Hook and Loop fasteners.

You may remember the fiascos with the trademarking of the term Makerspace. First a German accelerator tried to trademark it as a defensive trademark, then a British company tried to do it for their line of storage racks. In both cases they got a lot of heat, and their applications were declined, but there are relevant points worth mentioning here. First, international registrations of trademarks aren’t all that different from the US, so much of this article is relevant in other countries. Second, there’s no such thing as a defensive trademark: you either use the mark or you lose it. Finally, a brand is an emblem of a company, but it’s also a focal point for the relationship between the company and the public. If you lose the good will of the people, the brand has no value.  This is why it’s important to not only have a strong brand, but to have the ability to protect it from people who would copy it and use it improperly without permission.

Filing a trademark can be intimidating the first time. It’s surprisingly easy to do, but it’s also easy to screw up if you don’t do enough preparation. Their office action emails are confusing legalese that require a few attempts to decipher, but the office itself is approachable and easy to work with. All of my registrations so far have been successful, and my one mistake was renewing my registration with a slightly different name and completely different address (you need to renew your registration every 5 years). They were right to throw up a red flag claiming that I couldn’t register without proof of change of ownership, but a friendly mea culpa reply was enough to satisfy them. I hope to never need to flex my registrations’ muscles, but I’m happy to know the USPTO is there and takes trademark protection seriously. You can read even more helpful material from the USPTO trademark basics web site.