One of the first things we learn about computers is the concept of binary ones and zeroes. When we dig into implementation of digital logic, we start to learn about voltages, and currents, and other realities of our analog world. It is common for textbooks to use flow of water as an analogy to explain flow of electrons, and [Glen Anderson] turned that conceptual illustration into reality. He brought his water computer to the downtown Los Angeles Mini Maker Faire this past weekend to show people the analog realities behind their digital devices.

[Glen]’s demonstration is a translation of another textbook illustration: binary adder with two four-bit inputs and a five-bit output. Each transistor is built from a plastic jewel box whose lid has been glued to the bottom to form two chambers. A ping-pong ball sits in the upper chamber, a rubber flap resides in the lower chamber covering a hole, with a string connecting them so a floating ball would lift the flap and expose the hole.

Here’s how an inverter works in this computer: Input is a pipe connected to the upper chamber. Incoming water (representing one) fills the upper chamber to float the ball. As the ball floats, it lifts the flap and drains water out of the lower chamber. Output is a pipe connected to this chamber, so any water is drained from output pipe as well. This absence of water represents zero, inverse of output, thus this box is a water NOT gate.

Rear of water computer inverter, with source visible and drain not visible below the flap. 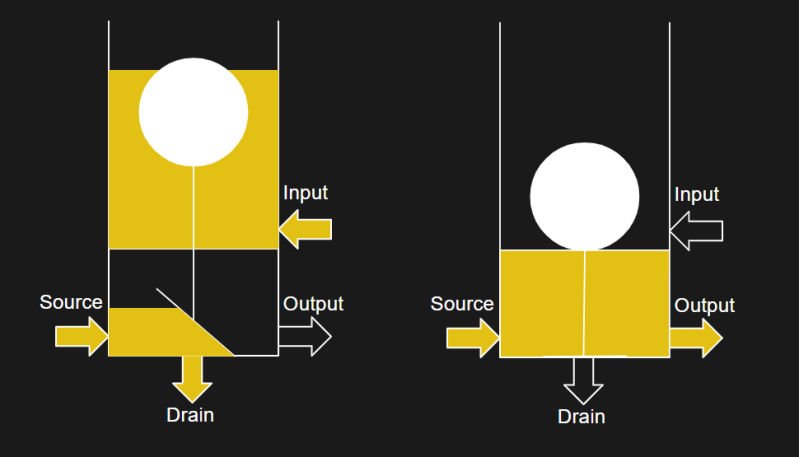 As a Maker Faire exhibit, [Glen]’s water computer appeals to all audiences. The colorful boxes and soothing sound of flowing water makes this water feature an appealing piece of kinetic art. Young children are happy to help power the computer, filling buckets of water from drain tanks and lifting them up to refill source tanks. Those with electronics knowledge can see concepts illustrated with water. Not just basic ideas like “source” and “drain” but also more advanced concepts like “leakage current” and “threshold voltage”. Each length of pipe connecting boxes represents wire capacitance, the flow rate of water dictates switching speed, the list goes on for this surprisingly faithful educational model of NMOS logic.

Building this project with his children was certainly a great way to help explain daddy’s career as a chip designer. With all the effort put into this creation, it’ll surely resurface again in another venue. [Glen] hopes to exhibit this water computer again at Bay Area Maker Faire 2019 in San Mateo. By then it should feature a few improvements like streamlined setup, teardown, improved reliability, and better documentation to make debugging easier when things go wrong. A quick recovery is desirable after overzealous children pulled a bunch of pipes sending water shooting everywhere.

For now, those still wondering how two tables full of floating ping-pong balls can perform computation could seek our guide Make Logic Gates Out Of (Almost) Anything. And finally, a Hackaday salute to all the parents and educators for your effort teaching future generations… which occasionally means being soaked with water by the end of the day.