While not quite in a cave, the idea of making your own exoskeleton with limited tools does have a Tony Stark esque vibe. [Andrew Piccinno] is a mechanical engineer pursuing the dream of 3D printing a full-body exoskeleton called 3X0. It’s a project he’s been ruminating on since college, but the work really began in earnest about five months ago. Unfortunately, there are too many pictures to include here, but check out his Instagram or makeprojects for more photos. 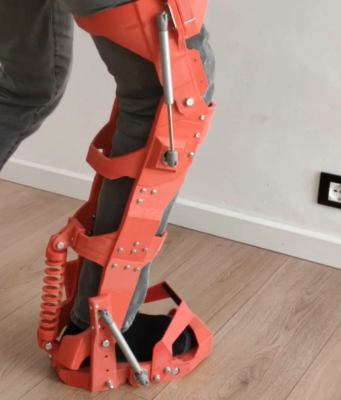 To make sure parts fit, [Andrew] started with creating a mesh of his body. After running fifty pictures of himself holding relatively still through some photogrammetry software, he had a decent mesh. While measurements weren’t millimeter-accurate, the relative sizes of everything were reasonably accurate. While the design is modeled with his measurements in mind, all the different pieces are parametric, which in theory would allow someone to tweak the designs to fit their own body.

So far, all the parts have been entirely 3D printed, except for steel balls bearings, gas pistons, and tension bands. The non-3D printed parts are picked to be easy to obtain as the gas piston is just 100 N furniture pistons. The design process includes quite a bit of math, motion study, and simulation to make sure the part that he’s printing will not only fit but move correctly. Many parts, such as the shoulder, are built around a large custom bearing that allows the piece to move correctly with the user’s joints.

While still in the middle of development, [Andrew] has made some serious progress, and we’re looking forward to seeing it completed. The current design is primarily passive with just a few springs and pistons, but he is already looking forward to making it active to the degree that it can augment a user’s motions rather than just taking the load off. It’s clear that [Andrew] believes that exoskeletons are a look into a potential future, and we couldn’t agree more. In a similar vein, perhaps the techniques used in this powered exoskeleton arm on a budget could be used to power the 3X0?

22 thoughts on “Printing Your Own Exoskeleton”