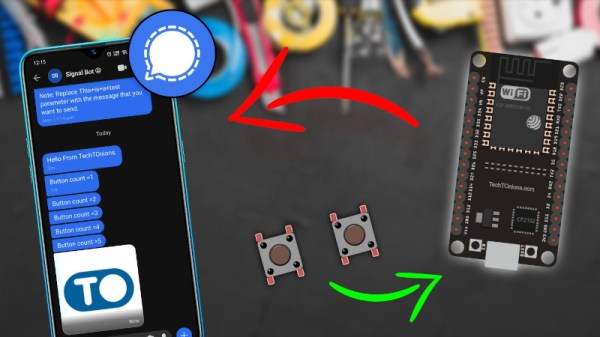 Signal is a popular encrypted messaging app, typically used on smartphones. The cross-platform service can now be used via the ESP32, however, thanks to the work of [Dharmik] and [Tirth].

The demonstration is simple, using an ESP32 microcontroller fitted with two push buttons. When one button is pushed, it increments a counter and sends a Signal message noting the current count. The other button sends an image as a Signal message.

The project relies on a Signal bot to deliver an API key that enables the project to work. Messages are sent by making HTTP requests with this key to the CallMeBot.com server. With the API key as authentication, users can only send messages to their own number, keeping the system safe from spammers.

While the demonstration is basic, it merely serves to illustrate how the project works. The aim was to allow home automation and other Internet of Things systems to send Signal messages, and through this method, it’s now possible. The highly security conscious likely won’t want to rely on a random third party server, but for those tinkering around, it may not be such a big deal.

The Internet of Things has a long history with self-messaging projects; we featured the Twittering Toaster back in 2008! Video after the break.