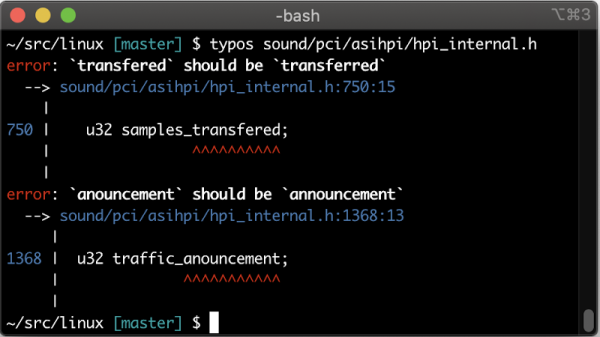 For most of us who didn’t do well in high school English class, spell checkers are a real game-changer. Sure, you can still swap a “to” and a “too,” but a spell checker will catch a lot of typos. But what about in your source code? You usually don’t spell check source code and even if you did, the rules are funny. After all, “my_proejct” is a perfectly fine variable name, but you probably meant “my_project.” That’s where a program called typos comes in. It aims to be a spell checker for source code that is fast enough and with a low enough false positive rate that you can run it against changed code and reject spelling problems.

Sure, if “my_proejct” is a one-time typo, the compiler or interpreter will probably catch it. But it won’t catch comments and it also won’t catch something you spell wrong consistently. For that you need something like typos.