On the way back from Hackaday Munich a couple of us got the chance to stop off in the UK, so we thought we’d take the opportunity to visit London Hackspace. With close to 1100 members and more than 6500 sq ft of space over two floors, it has to be one of the largest hackerspaces we’ve seen. [Russ Garrett] and [Jasper Wallis] were kind enough to show us around. 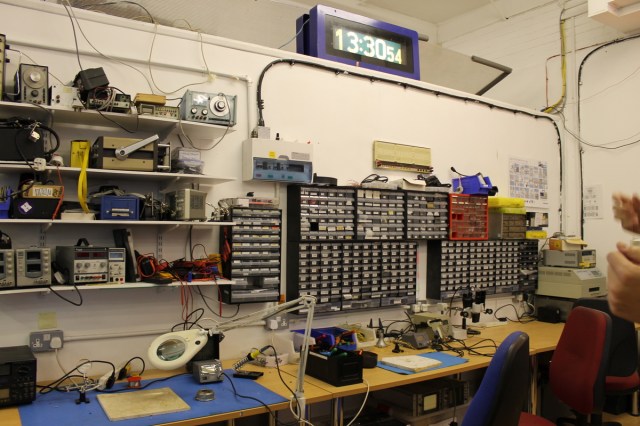 The upstairs lounge area is mixed use. It contains soldering stations, laser cutters, knitting and sewing machines, 3d printers, a massive segmented display, a tuck shop, and beer on tap which they brew on the premises! 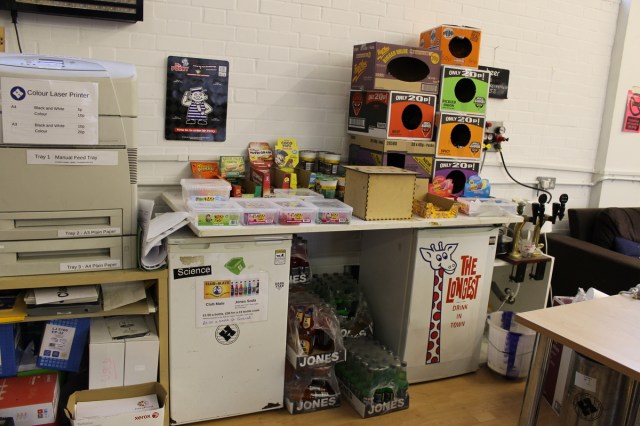 They have an ancient Stratasys 3d printer, one of the first commercial machines ever. This of course has now been gutted and replaced with mostly open source components, and now appears to spend most of its life as a storage cupboard! 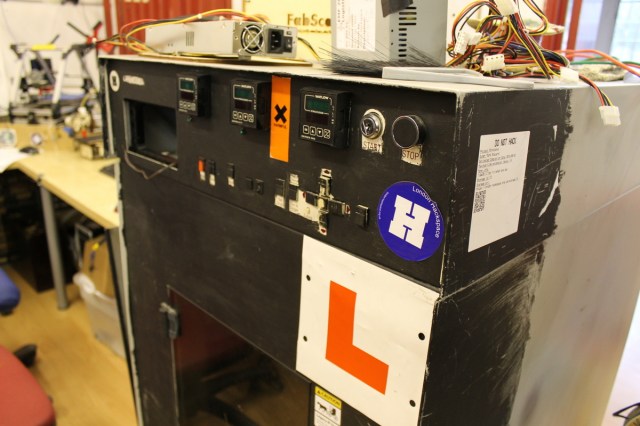 Downstairs is a large storage area with racked boxes for each member. There’s also a dirty metal shop, a dusty wood shop, and a biohacking lab. We don’t see many labs and were advised to ‘not touch anything’ just to be safe. The Biohackers are trying to get certification to do more extreme projects like genetic engineering, we can’t wait to see what they start producing here. 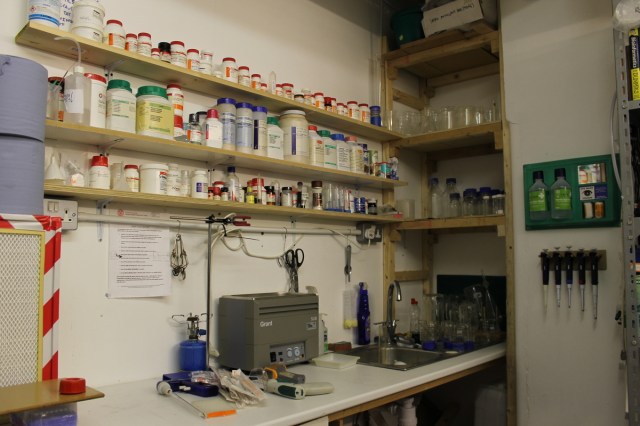 In the metal shop we encountered a fine beardy fellow named [Phil] who was knocking up a set of collapsible mooring points for boats along the nearby canal, this project had popped up out of nowhere from a quick discussion on the google group that morning. This really is the power of a vibrant hackerspace, that a quick discussion in the morning can turn into a working project by the afternoon. 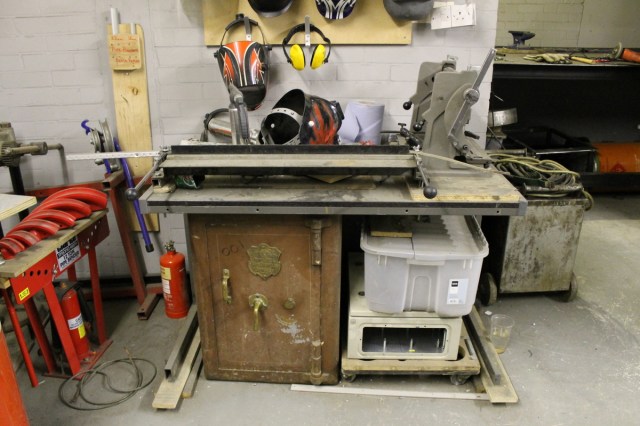 The wood room has all the basic tools, and there’s a wood carving group that meets regularly if you are that way inclined. They need better dust extraction and this will be a topic for a future fundraising drive. 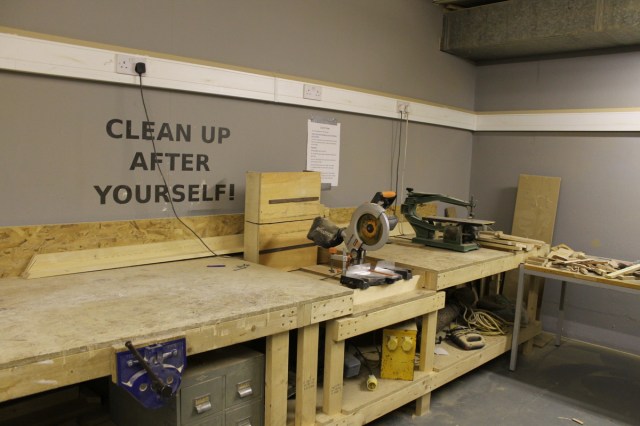 The space also has two 5-axis industrial robot arms that have been donated to the space. These were discarded because someone had lost the cables which apparently cost $5000 to replace. Of course our intrepid hackers just replaced the cable with one they made themselves and are now slowly building out a full control system based on gcode. They’re not quite there yet, but there are long term plans for a CNC machine and plasma cutter based on these arms. 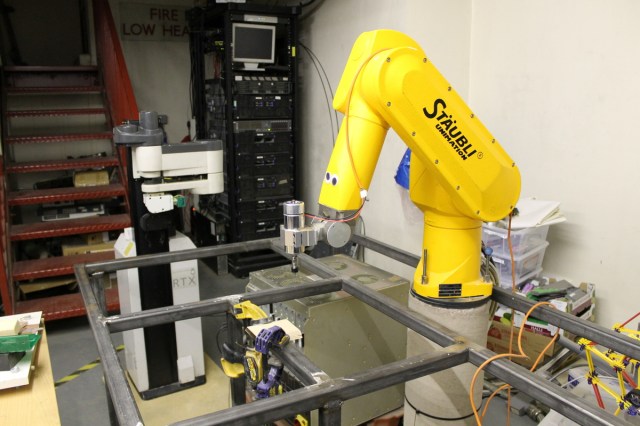 Since the space has so many members, they have become quite organized. There’s an RFID entry card system, a sticker printer, and a clear system of labelling for any projects or things left in the space. They’ve had some problems with storage, but their google group is incredibly active and they stay on top of issues that crop up in the space really quickly. The wiki is also very well documented, you can check out the equipment page as an example. 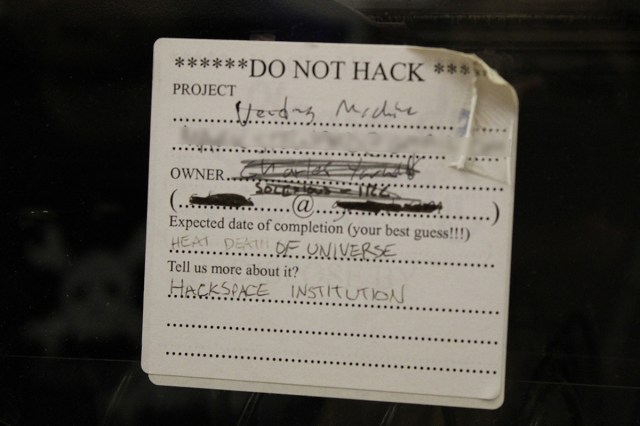 There are a number of weekly, biweekly or monthly events which include: London 3D, Not Just Arduino, Robotics, Biohacking, Woodwork, Metal working, Music hacking, Amateur Radio Meetings, Lockpicking, and Mind Hackers. If you want to join you are sure to find someone who shares your interests. 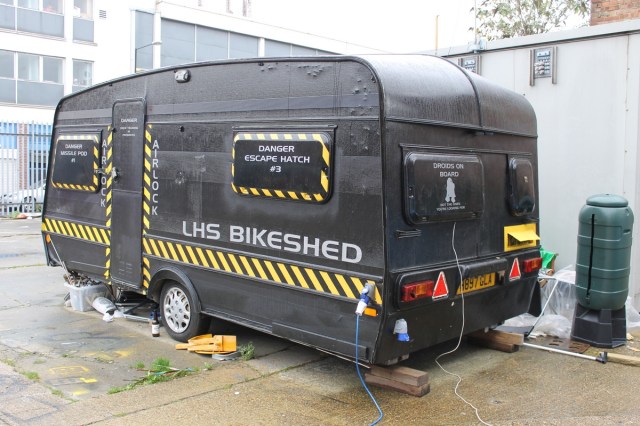 Finally out the back of the space is a large area for outdoor projects, these range from 30ft wide geodesic domes made out of PVC, to the massive hydraulic mast antenna the amateur radio enthusiasts are assembling. The backyard pièce de résistance however is the LHS Bike Shed, a space ship simulator that we first featured back in 2013. It has been much upgraded since then and we got to take her out on a mission courtesy of [Tom Wyatt] and [Charles Yarnold]. Our crew: [Russ] at the helm, [Ben] on engineering, and me on weapons – we put up a good fight, but of course in typical b-movie fashion our hyperspace jump went wrong and we ultimately died in the middle of a Red Dwarf-esque firefight. We had a great time and can highly recommend it if you have the chance.

DNH (Do Not Hack)

Robot Arms sign for the pub at Electromagnetic Field festival

To be hacked: this will made to vend components at some point

Do not hack! Waiting to be repaired