Part of our whirlwind UK visit took us to Cambridge, where we had the joyous opportunity to check out Cambridge Makespace. The main space was formerly part of the Institute for Manufacturing Robot Lab at Cambridge University, so it has a long heritage of supporting engineering innovation.

There was some excitement when we turned up, as a second LS6090 PRO Laser Cutter had just been delivered. As one of the most used items in the space, they needed a pair. They were situated in the largest work room which also included soldering stations, co-working areas and some materials/tools storage.

At the space we had arranged to meet [Simon Jelley] and [Mark Mellors], who we recently featured when [Simon] responded to our call for hoverboard tech in action (we’ll see more about their projects later). Luckily [Mark] is a Makespace member and gave us the grand tour. 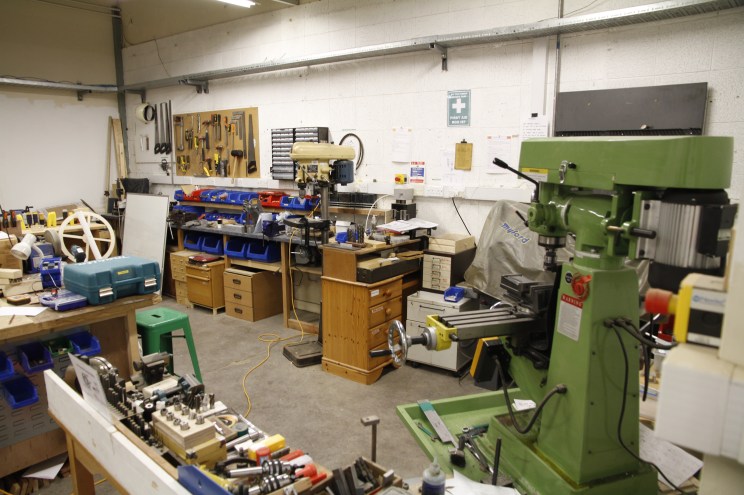 There is a separate machining room which has a large format CNC, Warco mill, lathe, and the usual wood working tools. Each piece of equipment in the space has a tool class and owners. Tool class red means high risk (to members or the equipment) and a member needs to be trained before use. Orange items pose moderate risk so training is optional, and green is low risk. Owners do basic maintenance and train new members. It all works out quite nicely.

The several other rooms include a large classroom/function room, a small sewing/knitting/printing & embossing room, the Cake Space (kitchen) with a large supply of tuck & pot noodle, and quite a lot of corridor which houses racks with member storage boxes.

MeArm obstacle on the Cannybot track

Cannybots – look at them go!

We saw a lot of great projects from members including a see-thru Stirling engine, battle bots, a BaseBot (which will be entered in to pi-wars), and [Brian’s] naughty or nice box. Ben spent quite a lot of time playing with the Cannybot line following robots that you can play like Scaletrix using a gamepad or your smart phone.

Hoverbot can only be tamed by mugs of tea

We had also asked [Simon] and [Mark] to bring in some of the projects we had seen on their site like the Nixie Clock, Diamagnetic Magnetic Levitation, and the Peggy Station Clock. However, we were really excited to see the Hoverbot in action. For it’s size, it made quite a lot of noise once it got going. They have been refining the design and we’re hoping that we might see a rideable version in the future.

Put your stuff away

Embossing machine with many heads

Cake Space (AKA the kitchen)

Do not be on fire