Just a few years ago, MakerBot was the darling of the Open Hardware community. Somehow, in the middle of a garage in Brooklyn, a trio of engineers and entrepreneurs became a modern-day Prometheus, capturing a burgeoning technology into a compact, easy to use, and intoxicating product. A media darling was created, a disruptive technology was popularized, and an episode of the Colbert Report was taped. 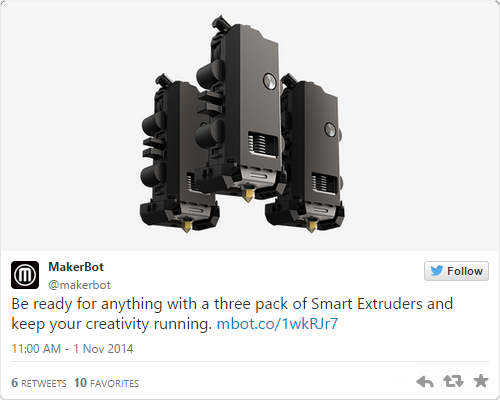 The phrase ‘meteoric rise’ doesn’t make sense, and since then the reputation of MakerBot has fallen through the floor, crashed through the basement, and is now lodged in one of the higher circles of hell. It’s not surprising; MakerBot took creations from their 3D object hosting site, Thingiverse, and patented them. The once-Open Source line of 3D printers was locked up behind a closed license. The new MakerBot extruder – the Smart Extruder – is so failure prone MakerBot offers a three pack, just so you’ll always have a replacement on hand. False comparisons to Apple abound; Apple contributes to Open Source projects. The only other way for a company to lose the support of the community built around it so quickly would be a name change to Puppy Kickers, LLC.

In the last few months, figurehead CEO of MakerBot [Bre Pettis] was released from contractual obligations, and MakerBot’s parent company, Stratasys, has filled the executive ranks with more traditional business types. It appears PR and Marketing managers have noticed the bile slung at their doorstep, and now MakerBot is reaching out to the community. Their new CEO, [Jonathan Jaglom] specifically requested a hot seat be built at Adafruit for an open discussion and listening meeting. Yes, this means Makerbot is trying to get back on track, winning the hearts and minds of potential customers, and addressing issues Internet forums repeat ad nauseam.

If you’ve ever wanted to ask a CEO how they plan to stop screwing things up, this is your chance. Adafruit is looking for some direction for their interview/listening meeting, and they’re asking the community for the most pressing issues facing the 3D printing community, the Open Source community, and MakerBot the company.

Already on the docket are questions about MakerBot and Open Source, MakerBot’s desire to put DRM in filament, the horrors of the Smart Extruder and the 5th generation MakerBots, problems with Thingiverse, and the general shitty way MakerBot treats its resellers.

This isn’t all Adafruit wants to ask; the gloves are off, nothing is off the table, and they’re looking for questions from the community. What would you like to ask the MakerBot CEO?

Personally, the best interview questions are when the interviewee’s own words are turned around on them. By [Jonathan Jaglom]’s own admission, the barrier to entry for 3D design work has been substantially lowered in the last three years, ostensibly because of incredible advances in Open Source projects. Following this, do MakerBot and Stratasys owe a debt to Open Source projects, and should Stratasys contribute to the rising tide of Open Source development?

That’s just one question. There will, of course, be many more. Leave them down in the comments. “You are not [Tim Cook],” while a valid statement in many respects, is not a question.

173 thoughts on “Ask Hackaday (And Adafruit): The New CEO Of MakerBot”