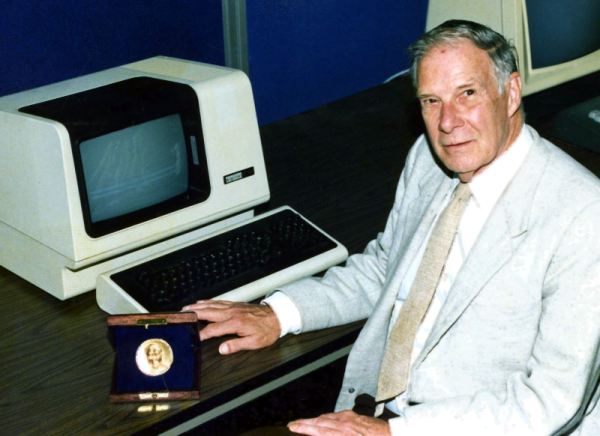 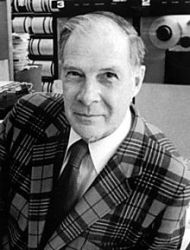 You may not know the name [Richard Hamming], but you definitely use some of his work. While working for Bell Labs, he developed Hamming codes — the parent of a class of codes that detect, and sometimes correct, errors in everything from error-correcting memory to hard drives. He also worked on the Manhattan Project and was a lecturer at the Naval Postgraduate school.

Turns out [Hamming] has an entire class from the 1990s on YouTube and if you are interested in coding theory or several other topics, you could do worse than watch some of them. However, those videos aren’t what attracted me to the lectures. As the last lecture of his course, [Hamming] used to give a talk called “You and Your Research” and you can see one of the times he delivered it in the video below. You might think that it won’t apply to you because you aren’t a professional academic or researcher, but don’t be too quick to judge.

Turns out, [Hamming’s] advice — even by his own admission — is pretty general purpose for your career or even your life. His premise: As far as we know, you have one life to live, so why shouldn’t it be a worthwhile one by your definition of worthwhile.

Along the way, he has an odd combination of personal philosophy, advice for approaching technical problems, and survival skills for working with others. If you are in the field, you’ll probably recognize at least some of the names he drops and you’ll find some of this technical advice useful. But even if you aren’t, you’ll come away with something. Some of it seems like common sense, but it is different, somehow, to hear it spoken out loud. For example:

If you don’t work on important problems, it’s not likely that you’ll do important work.

One piece of technical advice? Don’t waste time working on problems you have no way to attack. He points out that anti-gravity, time travel, and teleportation would be very lucrative. But why work on them when there appears to be no way to even remotely accomplish them today. Well, at least when he said that. There has been a little progress on a form of teleportation, but that wasn’t what he was talking about anyway.

While not a hack in the traditional sense, examining your life, career, and technical research to improve your own effectiveness is something to take seriously. We were hoping he would throw in a joke about error-correcting your career, but unless we blinked, no such luck.

Hamming’s work on block codes was followed about ten years later by the Reed-Solomon code which is found nearly everywhere now. Hamming is also associated with the term “hamming distance,” something we talked about when discussing Gray code.

END_OF_DOCUMENT_TOKEN_TO_BE_REPLACED 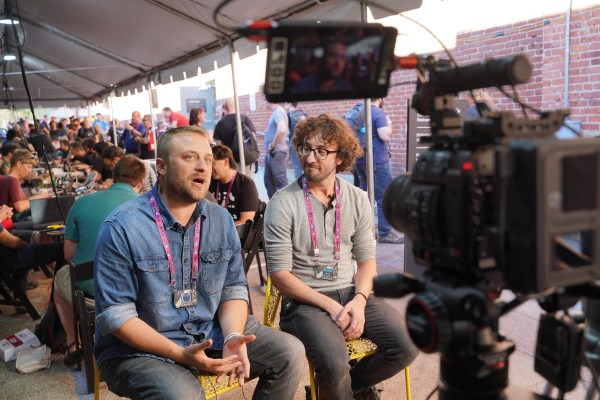 We caught up with Shah Selbe and Jacob Lewallen the morning after their project, FieldKit, won the Hackaday Prize. FieldKit is an open-source field-based research data collection platform. Which is basically a lot of fancy words for saying it’s a system for collecting sensor data in the field without being snagged by the myriad of problems associated with putting electronics in remote locations. It’s a core project of Conservify, a non-profit organization that seeks to empower conservation research.

As grand prize winner the FieldKit project was awarded a $125,000 cash prize, which Shah and Jacob say is transformative for a non-profit pursuing technology research and development. It seems the grant process has not evolved to embrace developing electronics, while opportunities for research projects have begun to involve recording large data sets in order to test a hypothesis. This is where FieldKit truly shines. Their vision is to provide a low-cost and extensible system that other researchers can use to collect data while making their own grant dollar go much further.

END_OF_DOCUMENT_TOKEN_TO_BE_REPLACED 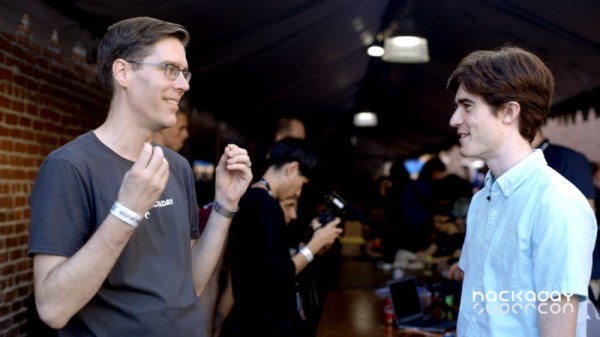 In less than four days, the fifth Hackaday Superconference kicks off in Pasadena, California, and it’s shaping up to be a hoot. With a cavalcade of exciting workshops and talks on offer, hackers and makers are pouring in from across the globe for this celebration of software, firmware, and hardware.

Of course, the real gift of Supercon is the personalities which make up this awesome community. [Sam Zeloof] is one such luminary, well known for producing his very own silicon integrated circuits in his parent’s garage. Not content to keep this knowledge to himself, [Sam] gave an amazing talk at the 2018 Supercon on just what goes into creating your own silicon fab on a budget.

Our very own [Mike Szczys] caught up with [Sam] for an interview, discussing being inspired by the work of [Jeri Ellsworth], as well as the finer points of getting into lithography at home. [Sam] will be in attendance at the 2019 Superconference, of course. While he won’t be on the speaking circuit this year, his brother [Adam] will be presenting a talk called Thermodynamics for Electrical Engineers: Why Did My Board Melt (And How Can I Prevent It)?, which is sure to be a must-see.

You really should be there, but alas tickets have been sold out for almost two months! Never fear, we’ll be livestreaming the event. Be sure to subscribe to Hackaday on Youtube to be notified when it all kicks off, around 10 AM Pacific Time on Saturday, November 16th. If you scored tickets and are heading to Supercon, we can’t wait to see you there — the badge hacking begins early Friday morning.

Be sure to check out Sam’s interview after the break!

END_OF_DOCUMENT_TOKEN_TO_BE_REPLACED 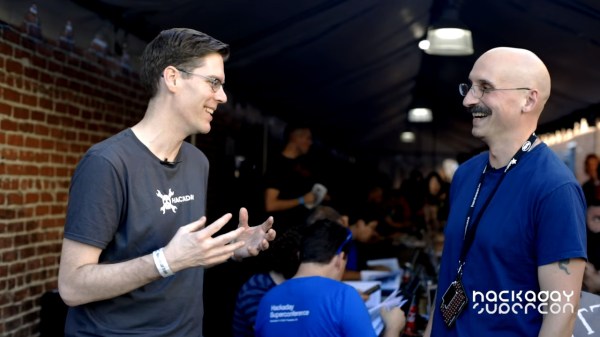 We’re just two weeks away from the fifth annual Hackaday Superconference, the single biggest gathering of hardware enthusiasts on at least one continent. It’s gearing up to be great, and we’re super excited for the opportunity to bring you such a diverse array of talks, workshops, and more.

What makes Supercon so great? All the awesome people you meet there. One of them is [Ted Yapo], who joined the Hackaday writing crew this year after gracing our pages and winning our contests for so long. You might remember him as the guy who turned an innocent USB-to-serial adapter into an SDR transmitter, or as the guy who tried to jump-start a car with a coin cell.

At last year’s Supercon, [Ted] gave a talk about dealing with cheap spectrum analyzers, which doubled as a live look into the article he wrote for the Hackaday Journal of What You Don’t Know. [Mike Szczys] caught up with [Ted] last year for a brief interview in the hardware hacking area, which you can catch after the break.

[Ted]’s back again this year with a talk about building an open-source multi-GHz sampling ‘scope, and why that’s harder than it seems. You really should be there, you know. Oh, what? It’s sold out? Don’t worry, just kick back and watch the live stream! Subscribe to our YouTube channel and you’ll be notified when it starts, which will be around 10:00 am Pacific on November 15th.

If you do already have a Supercon ticket, but didn’t get tickets for the workshop you wanted, go check again! We released a limited amount of tickets this morning and emailed everyone about it. See you there!

END_OF_DOCUMENT_TOKEN_TO_BE_REPLACED 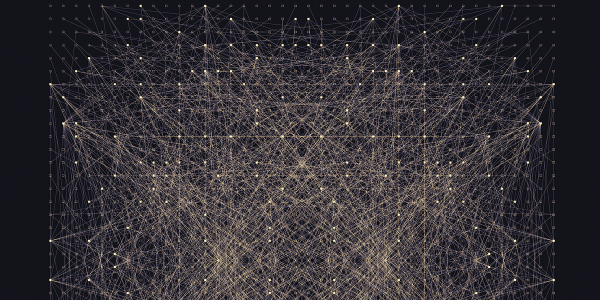 Join us on Wednesday, September 11 at noon Pacific for the Machine Learning with Microcontrollers Hack Chat with Limor “Ladyada” Fried and Phillip Torrone from Adafruit! 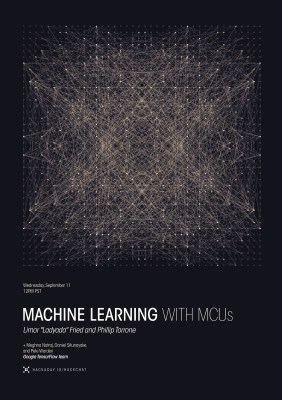 We’ve gotten to the point where a $35 Raspberry Pi can be a reasonable alternative to a traditional desktop or laptop, and microcontrollers in the Arduino ecosystem are getting powerful enough to handle some remarkably demanding computational jobs. But there’s still one area where microcontrollers seem to be lagging a bit: machine learning. Sure, there are purpose-built edge-computing SBCs, but wouldn’t it be great to be able to run AI models on versatile and ubiquitous MCUs that you can pick up for a couple of bucks?

We’re moving in that direction, and our friends at Adafruit Industries want to stop by the Hack Chat and tell us all about what they’re working on. In addition to Ladyada and PT, we’ll be joined by Meghna Natraj, Daniel Situnayake, and Pete Warden, all from the Google TensorFlow team. If you’ve got any interest in edge computing on small form-factor computers, you won’t want to miss this chat. Join us, ask your questions about TensorFlow Lite and TensorFlow Lite for Microcontrollers, and see what’s possible in machine learning way out on the edge.

Our Hack Chats are live community events in the Hackaday.io Hack Chat group messaging. This week we’ll be sitting down on Wednesday, September 11 at 12:00 PM Pacific time. If time zones have got you down, we have a handy time zone converter.

END_OF_DOCUMENT_TOKEN_TO_BE_REPLACED

Before you hit the road this weekend, grab the Hackaday Year in Review Podcast to keep you company during your journey.

We released this on Tuesday and mentioned that the podcast was available on all major podcasting platforms. But turns out you need to wait for approval which we have since received.

This first installment covers some of our favorite trends, articles, and hacks from 2018. Get caught up on what you missed this year, and head over to the show notes for links to everything Mike and Elliot covered in the 67 minute walk down memory lane. We’ll be doing this more regularly in 2019 so pick your podcast aggregator and subscribe to Hackaday to keep up with new episodes.