The tangled web woven by Week 22 of the Caption CERN Contest has come to a close. It’s been another bumper week with 112 comments. Thank you to everyone who submitted a caption! We realize it may have been hard for some of the network engineers out there to type through their tears, but thank you for persevering! While we don’t know exactly what these two CERN scientists were wiring up, [rwells97] did figure out that the scope in the image is most likely a Tektronix 545/A, which was a popular scope back in the late 1950s and early 1960s. The weight on a beast like that was around 70 lbs!

This week’s winner is [alan] with “Daft Punk was actually two of CERN’s best acoustics researchers prior to forming the band. Here they are after hours working on the track that would later be named ‘Da Funk'”. [Alan] is a Computer Science PhD candidate with focus on computational biology, specifically population genomics. Hopefully he has some hardware in the mix somewhere, because we’re sending him a Stickvise from The Hackaday Store! 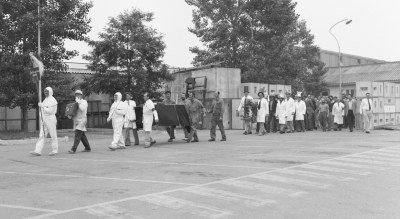 Something a bit different this week. CERN is probably best known for the various particle accelerators they’ve had over the years. One of the first units was synchrocyclotron SC-1, which operated from 1957 to 1974. According to the album page on CERN’s servers, SC-1’s last day of operation was celebrated with a funeral procession. Scientists, and staff walked the grounds with flowers, top hats, and even a shrouded coffin. We can all related to decommissioning a well-worn piece of equipment. Be it a computer, a machine tool, or even a synchrocyclotron, there are always the mixed feelings of thanks that it did a good job, and relief that it will no longer need to be maintained.

Even though we have a pretty good idea of what’s going on in this image, we’re going to caption it anyway! Give us your best captions of what you think is really going on here! This week’s prize is a LightBlue Bean from The Hackaday Store. Add your humorous caption as a comment to this project log. Make sure you’re commenting on the contest log, not on the this post. As always, if you actually have information about the image or the people in it, let CERN know on the original image discussion page.