It’s always interesting to see how much can be done with CMOS sensors though. A recent article described the imaging of single molecules of DNA stretched on a surface using a mobile phone camera. These results are pretty impressive when you consider that each fragment is only 10 microns long (0.01mm). The researchers 3D printed an attachment for the phone which included a blue excitation laser. This laser was used to illuminate DNA which had been stretched out on a surface and stained with a fluorescent dye. When illuminated the dye lights up green and passes through a filter and magnifying lens where it is detected by the phones camera.

However, if you’re less interested in fluorescence and more interested in a general purpose cheap microscope, a number of other options are available. Inspired by Kurt’s post of his Echolabs phone microscope, I’ve been playing with his and other phone based microscopes.

I believe the Echolabs microscope was originally a freebie given away at tradeshows. However it’s now available from their site for $10. The microscope comes as a flat packed laser cut kit. While it can be a little fiddly to assemble there’s a great assembly video available and it shouldn’t take more than 15 minutes or so.

The project is great fun, and definitely and interesting project, but how good is its performance as a microscope. In order to investigate this, Kurt introduces the USAF1951 resolution target. The USAF1951 target is a slide on which is marked with features of ever decreasing size. I got mine from Thorlabs.

This target allows you to determine the smallest feature that you can resolve with your microscope. Somewhat ironically the target will cost you many times more than the Echolabs microscope, but if your interested in these things it’s a useful calibration standard to have around.

The image I acquired using the wooden microscope is shown below on the left. This is the inner set of targets from the USAF1951, the first level down. Like Kurt I was able to just about resolve group 5 element 2. Each line here is 36 microns thick (0.036mm). That’s not bad for $10!

The USAF1951 captured using the Echolabs wooden microscope and an iPhone 6S.

On a whim, and hoping to have a small inspection loupe which I could carry around, I also picked up an Olloclip macro pro lens. While I can faintly hear muffled cries of “that’s not a hack”, a good inspection loupe is an invaluable hacker tool. I also thought it would be interested to see how it performed with the USAF1951.

The image above right shows the USAF1951 target captured with this lens on the iPhone 6S. While significantly more expensive than the Echolabs microscope, the Olloclip shows that the iPhone optics can be pushed a bit further. All of group 5 is clearly visible and if you zoom in, group 6 element 2 can clearly be discerned. This is a linewidth of about 7 microns (0.007mm). Both the better illumination possible with the Olloclip, and the improved optics probably help.

Capturing Images from Your Traditional Microscope

While imaging micron-scale features is great fun, the microscope I use most often is a general purpose inspection microscope for inspecting components and SMD rework. Often I want to take a quick snap of a piece of work too, either to document my progress or highlight a fault. In the past I’ve struggled to jam mobile phones against the eye piece lens in order to take a picture. Surprisingly this kind of works, but it’s a fiddly and awkward process.

While I’ve used eyepiece C-mount adapters and cheap CCD imagers from Shenzhen. The results were less than ideal, and I often just want to take a quick snap and upload it. Surprisingly there are clamps which make the jam phone against eye piece process a little more robust (though they are surprisingly expensive). There has to be a 3D-printed alternative for this one.

Still, after some fiddling the clamp can produce quite reasonable images. The picture below shows 0.8mm pitch pins on a TQFP IC. 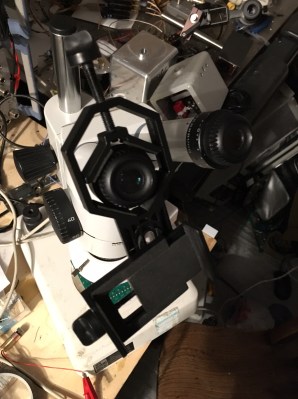 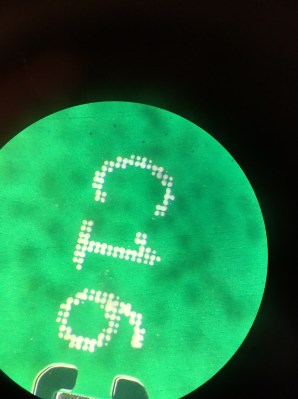 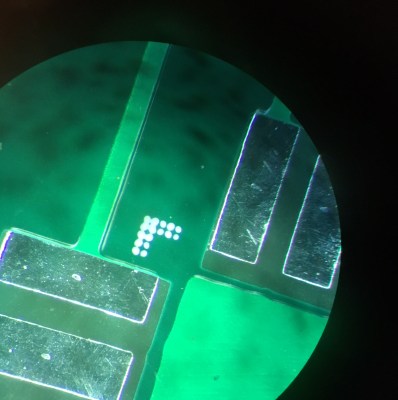 Hopefully this short review of phone based microscopy has given you some inspiration. I’d love to hear about more optics based hacker projects. How have you put your old cell phone’s camera to use? If you know of any cool projects, or are planning one, please comment below!

31 thoughts on “IPhone Microscopy And Other Adventures”