The incredible screw drive tractor is back. We’ve covered the previous test ride, which ended with a bearing pillow block ripping in half, but since then, again, a lot of repair work has been done. [REDNIC79] reinforced the load-bearing parts and put on a fresh pair of “tires”. The result is still as unbelievable as the previous versions, but it now propels itself forward at a blazing 3 mph (this time without tearing itself apart). 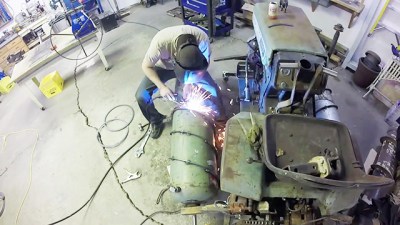 [REDNIC79] walks us through all the details of the improvements he made since the first version. After the last failure, he figured, that a larger screw pod diameter would give the vehicle a better floatation while smaller thread profile would prevent the screws from digging too deep into the ground, thus reducing the force required to move the vehicle forward.

[REDNIC79] found four identical 100 pounds, 16 inch diameter propane tanks to build the new pods from. The tanks were a bit too short for the tractor, so he cut open two of the tanks and used them to extend the other two before welding a double thread screw onto each. He also tapered the front ends of the tanks to make the ride even smoother. After mounting the new pods to the speedster, a pair of custom steel chain guards were added to prevent rocks from getting into the chain. And then, it was time for another test ride. Enjoy the video:

29 thoughts on “Screw Drive Tractor Is About To Conquer Canada”