Einstein referred to her as the most important woman in the history of mathematics. Her theorem has been recognized as “one of the most important mathematical theorems ever proved in guiding the development of modern physics.” Yet many people haven’t the slightest clue of who this woman was, or what she did that was so significant to our understanding of how our world works. If you count yourself as one of those who have never heard of Emmy Noether and wish to enlighten yourself, please read on. I can only hope I do her memory justice. Not just by telling you who she was, but by also giving you an understanding of how her insight led to the coming together of symmetry and quantum theory, pointing academia’s arrow toward quantum electrodynamics.

Being a female in Germany in the late 1800s was not easy. She wasn’t allowed to register for math classes. Fortunately, her father happened to be a math professor, which allowed her to sit in on many of his classes. She took one of his final exams in 1904 and did so well that she was granted a bachelors degree. This allowed her to “officially” register in a math graduate program. Three years later, she earned one of the first PhD’s given to a woman in Germany. She was just 25 years old.

1907 was a very exciting time in theoretical physics, as scientists were hot on the heels of figuring out how light and atoms interact with each other. Emmy wanted in on the fun, but being a woman made this difficult. She wasn’t allowed to hold a teaching position, so she worked as an unpaid assistant, surviving on a small inheritance and under-the-table money that she earned sitting in for male professors when they were unable to teach. She was still able to do what professors are supposed to do, however – write papers. In 1916, she would pen the theorem that would have her rubbing shoulders with the other physics and mathematical giants of the era.

Emmy Noether’s Theorem seems simple on the onset, but holds a fundamental truth that explains the fabric of our reality. It goes something like this:

For every symmetry, there is a corresponding conservation law.

The Universe is Lazy 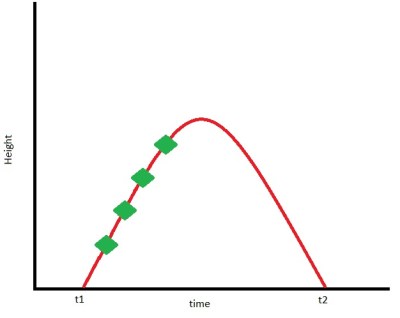 I would wager a few Raspberry Pi Zeros that many of you already have an intuitive grasp of this principle, even if you’ve never heard of it before now. The principle of least action basically says that the universe has figured out the easiest way possible to get something done. Mathematically, it’s the sum over time of kinetic energy minus potential energy as the action occurs. Let us imagine that you’re trying to program an STM32 Discovery eval board in GCC. After about the 6,000th try, you toss the POS across the room and grab your trusty Uno. The graph depicts the STM32 moving through time and space.

The green points represent particular points of how how high the STM32 is at a given point in time. Note that there are no values for height and time – this example is meant to explain a principle. We can say that at these points (and all points along the curve), the SMT32 has both kinetic and potential energies. Let us call the kinetic energy (kt) and the potential energy (pt). The ‘t‘ subscript is for time, as both the energies are functions of time. The action for each point will be called s, and can be calculated as:

However, action is the total sum of the difference of energies at each point between t1 and t2. If you’ve read my integral post, you will know that we need to integrate in order to calculate the total action.

Now before you get your jumper wires in a bunch, all that is saying is that we’re taking the difference in potential (p) and kinetic (k) energies at each point along the curve between t1 and t2, and we’re adding them together. The elongated S symbol means a sum, and the (dt) means as it changes over time. The path that the STM32 will take will be the path where the action S is at its minimum value. Check out the video in the source section below if you’re confused. It’s only 10 minutes and goes into this concept in easy to follow details. 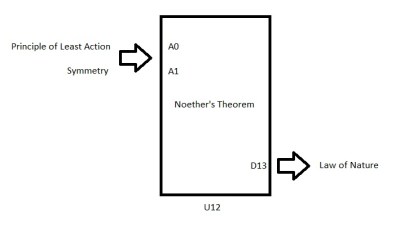 Noether’s theorem is based upon a mathematical proof. It’s not a theory. Her proof can be applied to physics to develop theories, however. Now that we know what the principle of least action is, we can do just this.

Any law of nature can be traced back to a symmetry and the least action principle. Let’s consider two very simple examples – Newton’s first law of motion and the first law of thermodynamics.

Space has what is known as translational symmetry. That’s just fancy-pants talk for saying that what you do in one point in space is the same as what you do in another point in space. It doesn’t matter what hacker space you throw your STM32, it will act the same at all hacker spaces on earth. Space itself provides the symmetry. And because the principle of least action applies, you have a natural law – the first law of motion.

Time has the same translational symmetry as space does. If I toss the STM32 now, and toss it tomorrow, it will act the same. It doesn’t matter what point in time I toss it, the results will always be the same. Thus energy is conserved between different points in time. Time is our symmetry, and the 1st law of thermodynamics is the result.

Now, I realize these examples might seem a bit useless. But when you dig a bit deeper, things get interesting. Electrical charge is also conserved. Noether says there must then be some type of symmetry involved. What do you suppose that symmetry might be? Keep following that rabbit hole, and you’ll end up face to face with QED. We’ll get there in a future article, so for now just keep Noether’s Theorem in mind.