We see an awful lot of arcade cabinets around here, and so it’s pretty unusual for a build to get much more than a second glance. But, this beauty is just too good not to mention. The entire build, named “Ready Player One” as a nod to the engrossing Ernest Cline novel, is detailed in [scoodidabop’s] post on Reddit. 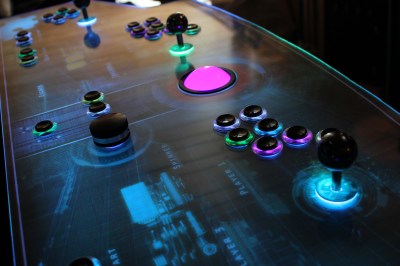 While it’s pretty enough that we would have made this post on aesthetics alone, the features really seal the deal. It has a complete set of fully RGB LED lit controls for up to four players, allowing you to play virtually all of the classic arcade games you can think of. It even has dual light guns — something you don’t see on most home builds.

As you might imagine with a build this advanced, it’s not [scoodidabop’s] first. Be sure to check out his older NASA arcade cabinet build that has a lot of the same features. Thinking about building an arcade cabinet yourself? Here’s a simpler project built from a coffee table that is more beginner-friendly.