Large 3D printers have been around for years now. That’s not to say building a large form factor 3D printer is easy – the strength of materials doesn’t scale linearly, and all that stuff Galileo figured out 400 years ago and whatnot. I need only to point at the Part Daddy as evidence of how hard it is to make a truly huge printer. 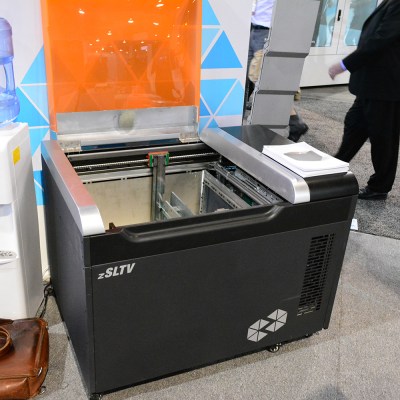 However, this year we’re seeing some interesting approaches to building bigger printers. The Cronus from Titan Robotics is a five-toolhead machine using very advanced slicing algorithms to print large objects faster. The Cronus is based on Autodesk’s work on Project Escher (and there’s a Cronus at Pier 9), to use multiple extruders and nozzles to print a single object. It’s very, very heady stuff and it’s awesome to see this in the wild.

Big filament printers are one thing, but if you really want a mind-bending build you need to check out the zSLTV from UniZ.

The zSLTV is a resin printer, but unlike every other resin printer that either pulls a part up or sinks a part down into a pool, this thing prints sideways. Basically, it’s a giant tub with a Z (X? or Y?) platform submerged in resin. On one side of the tub is an LCD and a few UV LEDs. It’s huge, fast, and very high resolution. Yes, you’ll need 60 or 70 gallons of resin, but if you need this capability you probably don’t care much about cost.

Last year, Monoprice made a few waves with the announcement of a very inexpensive filament printer and an unbelievably cheap resin printer. The resin printer was a failed experiment and was never released, but the Monoprice MP Mini Select was really, really good.

This year, Monoprice is doubling down on inexpensive machines with a $150 delta printer, and what might be the least expensive resin printer we’ve seen. There’s going to be a second version of the MP Mini Select, with improvements taken directly from the community’s tinkerers. Next month, Monoprice will release their top-of-the-line resin printer, at a price comparable to the Form1s and other high-end STL printers on the market. Also of note in the Monoprice suite is the MP 3Series Commercial Printer, referred to by the Monoprice team as the ‘3Mill’. This will be available for $800 in a few months.

A year or two ago, it seemed every company was presenting a 3D printer at CES. This year? Not so much. The Bosch booth didn’t have a Dremel printer on display, but Polaroid did have this tiny cube of a printer:

Hardware isn’t any good without the software to drive it, and this year Lulzbot is taking the lead with some great announcements. The software stack has always been the weak point of resin printing, and now Lulzbot is working with Monkeyprint to improve the state of SLA printing. They’re working on their own edition of Cura, and the Blender Foundation is getting some help from Lulzbot.

The MarkForged booth was showing off some impressive parts printed in metal. Their system uses powdered metal contained in a filament. After printing is complete, this plastic is dissolved and the part is sintered. It’s an expensive machine at around $100k, but it’s still a very interesting technology.

All filament 3D printers have a basic problem with the strength of the parts they produce. Parts are strong on the X and Y axis, but not on the Z axis because inter-layer bonding is the weak link. Essentium Materials has the solution. They’re producing a line of filament clad in a very thin layer of carbon. Once the part is printed, it’s heated with RF, bonding the individual layers to each other. It’s a clever solution, and relatively simple to implement on existing printers.

What does the future hold for 3D printing? It’s going to take a while for the general public to realize that you can do more than print low-poly Pokemon. Until that time, we’re happy to sit back and enjoy the best 3D printing has to offer. The technology has never been better, and it’s only going to improve from here.