END_OF_DOCUMENT_TOKEN_TO_BE_REPLACED

Last October, Next Thing Co., makers of the popular C.H.I.P. platform unleashed the C.H.I.P. Pro, a very capable Linux system on a tiny board. The goal of the C.H.I.P. Pro is to be the brains of a project or product, similar to the Gumstix boards from an ancient era long before the Raspberry Pi.

Introduced alongside the C.H.I.P. Pro was a fantastic little device. The GR8 module is a complete Linux system on a chip, with an ARM Cortex-A8 processor and 256 MB of RAM, all on a relatively small BGA chip. This is a drop-in part that gives any piece of hardware a Linux brain.

There was a datasheet at the time the C.H.I.P. Pro and GR8 module were released, but a datasheet can only go so far. What you really need to use a Linux system on a module is a massive tome filled with descriptions of registers and all the hardware nooks and crannies needed to get the part working. At CES this week, Next Thing Co. brought what everyone has been asking for: an NDA-free complete register documentation for the core they’re using on the GR8 module. This is 400 pages of spiral-bound goodness that will tell you how to do everything with this chip.

Using the C.H.I.P. for products

When the C.H.I.P. was first released, it was easy to write it off as a board glomming on to the popularity of the Raspberry Pi. However, Next Thing Co. didn’t start with the C.H.I.P. – they started with Otto, an animated gif camera built around the Raspberry Pi compute module. The Otto was successful, but the compute module is a little expensive, so Next Thing Co. turned their attention to building a modern, inexpensive version of the old Gumstix boards.

The C.H.I.P. Pro and GR8 is the culmination of this work, and already a few companies have used it in production. At the Next Thing Co. suite, they showed off a new version of the Outernet base station powered by the C.H.I.P. Pro, and the TRNTBL, a wireless, Bluetooth, Airplay, and Spotify-connected turntable.

To illustrate how easy using the C.H.I.P. Pro in a product is, the guys at Next Thing Co. removed the Pi-powered guts of an Otto and replaced it with a C.H.I.P. Pro. There wasn’t much inside – just a battery, camera module, and a few bits and bobs. That’s great for anyone who wants to build a product that needs a relatively fast chip running Linux, and the stuff from Next Thing Co. makes it easy. 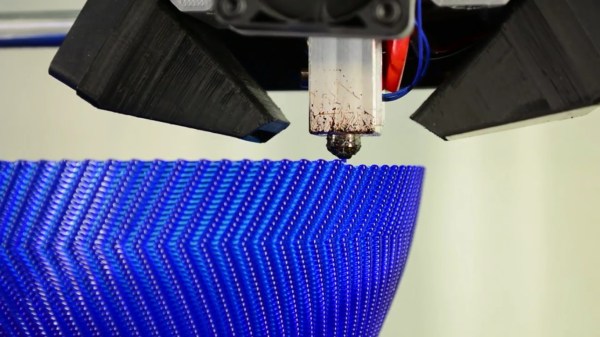 Lulzbot is the poster child of the RepRap project. Everything they do is big-O Open. At CES, Lulzbot launched the MOARstruder, a tool head with a 1.2mm nozzle diameter. That pushes a lot of plastic out, allowing for faster print times. This is the same nozzle diameter as the largest E3D Volcano, and from the big prints sitting around the booth, the results are similar: you get faster prints at larger layer heights, and the layer lines become a design feature.

Also announced by Lulzbot this week is the release of Cura 2 (Lulzbot edition), a partnership with the Blender Institute to develop a streamlined version of the best Free 3D modeling software available, and a collaboration with Monkeyprint to develop Free Software for resin-based 3D printing.

END_OF_DOCUMENT_TOKEN_TO_BE_REPLACED 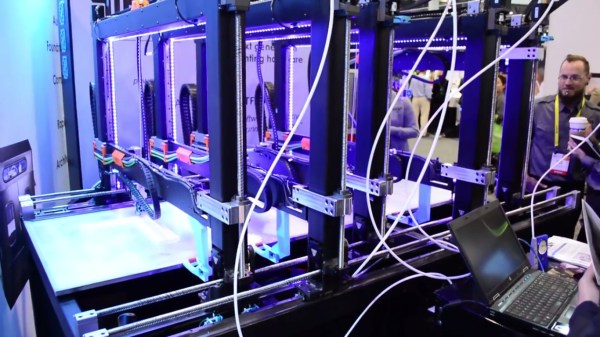 About a year ago, Autodesk showed off one of the most innovative filament printers in recent memory. Project Escher is your basic Cartesian filament printer, but with a twist: it has five heads. These print heads work together to build large objects very quickly.

Autodesk open sourced the design of the Escher, and now it’s made it into commercial production thanks to Titan Robotics. The Cronus, which uses the same software as Project Escher, is big! Each of these gantries is driven by closed-loop servo motors and fancy ball screws, producing a total build volume of 77″x30″x20″. This open air version is printing in PLA. If you want to use it with materials where ambient temperature is an issue there is an option for an enclosed build environment.

This printer will be available for purchase starting February but no word yet on cost. They advertise the build volume as customizable so we expect the same of the price. 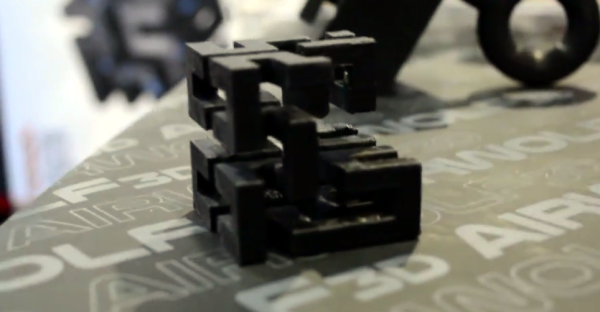 Over the last year, it seems the next big thing in 3D printing is dual and multi-extrusion. This gets you multi-colored objects, but if you have the right filament, it also allows you to print objects that would otherwise be impossible to print. This week, Airwolf 3D announced their HydroFill water soluble support material. They had a few sample prints and a fish tank, and yes this stuff does dissolve in water quickly.

There were a few problems with dissolvable support material in the past. PVA is water soluble, but it doesn’t print well. HIPS can be dissolved in limonene, but the resulting goo is toxic. Airwolf’s HydroFill beats both of these filaments, and the prints compare well to what E3D showed off with their Scaffold filament recently.

Check out my video below where [Jack Licorish] goes over the characteristics of HydroFill.

END_OF_DOCUMENT_TOKEN_TO_BE_REPLACED

At CES last year, Monoprice introduced a $200 3D printer. Initial expectations of this printer were middling. My curiosity got the best of me, and last summer I picked up one of these printers for a review. The Monoprice MP Select Mini is actually phenomenal, and not just ‘phenomenal for the price’. This machine showed the world how good one of the cheapest printers can be. The future is looking awesome.

You might think Monoprice wouldn’t be able to top the success of this great little machine. You would be wrong. This week, Monoprice announced a bevy of new and upgraded printers. Some are resin. Some are huge. One will sell for $150 USD.