Last weekend I ran out of filament for my 3D printer midway through a print. Yes, it’s evidence of poor planning, but I’ve done this a few times and I can always run over to Lowe’s or Home Depot or Staples and grab an overpriced spool of crappy filament to tide me over until the good, cheap filament arrives via UPS.

The Staples in my neck of the woods was one of the few stores in the country to host a, ‘premium, in-store experience’ featuring MakerBot printers. Until a few months ago, this was a great place to pick up a spool of filament that could get you through the next few hours of printing. The filament cost about three times what I would usually pay, but it was still good quality filament and they usually had the color I needed.

This partnership between MakerBot and Staples fell through a few months ago, the inventory was apparently shipped back to Brooklyn, and now Robo3D has taken MakerBot’s space at the endcap in Staples. Last weekend, I picked up a 1kg spool of red PLA for $40. What I found next to this filament left me shocked, confused, and insatiably curious. I walked out of that store with a spool of filament and a USB thumb drive loaded up with twenty-five STL files. This, apparently, is the future of 3D printing.

Everything For The Kitchen Sink 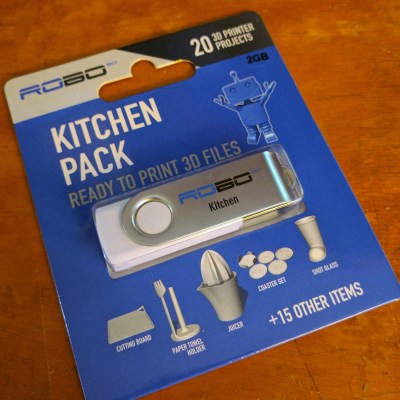 The focus of this article is Robo 3D’s series of USB thumb drives loaded up with ready to print 3D files. For $19.99, I picked up a 2GB USB thumb drive that is literally the same USB thumb drive I could pick up for free at any trade show or convention.

This is the ‘kitchen pack’, and includes models like a coaster, dipping bowl, an egg cup, tea candle holder, and a citrus reamer. There were a few other versions of this product; the ‘office pack’ included a business card holder and iPhone stand. The ‘bath pack’ included a soap dish and a shower head. All of these 3D model USB sticks were selling for $19.99.

The packaging for this USB stick deserves special mention. There are twenty 3D printable objects on this USB drive, split up into 25 separate .STL files. There are pictures of only five of these items on the packaging. Apart from a cutting board, paper towel holder, juicer, coaster set, and a shot glass, I had absolutely no idea what was on this USB stick. If you buy one of these, you have no idea what you’re going to get.

The Contents Of This USB Drive

What’s on this USB stick? Take a gander:

I have a folder of STL files and an .exe. Launching that application only opens up a new browser tab and directs it to this URL. At the time of this writing, that link is dead.

How about the files themselves? I now own various kitchen-related 3D printable objects, all of which can be printed on a 200×200 mm square bed. Everything from a bottle cap to a bottle is right here, just waiting to be printed.

While the utility of these objects are questionable, I must add they are at least unique. I spent several hours trolling Thingiverse and Yeggi to find these models. With the exception of a drink coaster set, and the table top football playset found on the packaging for the ‘office pack’ thumb drive, I can’t find any of these models online. They are, apparently, unique and most likely designed by Robo3D.

Here is the requisite slideshow for all of these models:

This is as inexplicable to me as it is to you. These are fine 3D printable models, but given 3D model repositories exist, they’re not really worth eighty cents apiece.

I can’t comprehend who this product is designed for. Putting 3D models on a USB stick would be great if we lived in a world where the Internet didn’t exist. If 3D printers were a thing in the mid 90s, I could easily see something like this existing. Business plans would be written on the basis that people would pay money for tiny little EEPROMs containing STL files stuffed into cartridges. This isn’t the 90s, though, and I find the idea that someone could own a 3D printer but still not have access to the Internet extremely odd.

This isn’t to say paying for 3D models isn’t worth it. Creating 3D models is an art form, and artists deserve to be paid. Gambody is a repository of paid models, and by all accounts they’re doing well. Here, you can find innumerable models of video game assets ready for 3D printing. Sure, the printability of these models might not be great (shout out to Maker’s Muse), but there’s nothing wrong with charging for 3D models.

The models included on the USB thumb drive really aren’t that great. Compared to the model of a Portal turret or Fallout power armor on Gambody, these models are fantastically cheap, but then again I could recreate a few of these models very easily in under 100 lines of OpenSCAD. You get what you pay for.

Portents of the Future

For the last year or two, the public perception of 3D printing has been in the gutter. A few years ago, the tech press was talking about how you could get 3D printable files for a dishwasher and fix your dishwasher yourself. Did one of the tiny slats in one of the vents in your car break? That’s a file down at your local dealership, and if you have a printer, they can just email it over. This was the promise of 3D printing.

Since then, 3D printing has fallen off the map for the public. It’s only about printing useless plastic trinkets, and it doesn’t look like Toyota will be uploading trim pieces for a ’07 Camry to Thingiverse anytime soon. There are problems with distribution — where does Maytag upload their parts? — problems with the technology itself, and someone has to get paid. A USB stick loaded up with STL files solves at least two of those problems.

But this is terrible. There is nothing remarkable about these models, and a quick perusal of any of the 3D printing repositories will find a suitable replacement for the models included on this USB thumb drive. This product fails simply because it doesn’t provide models of unique value to the customer purchasing it. Without that customer connection, buying this kitchen pack means paying for the convenience of not needing to locate and download the model you want to print. Ownership of 3D printers isn’t yet adequate to support that proposition.

That said, I could easily see Bethesda selling a USB thumb drive of 3D printable Fallout and Elder Scrolls assets. Valve would make a killing with a drive filled with 3D printable hats and knives. The idea of a USB drive filled up with printable parts is a valid one, but here it just falls flat on its face.