In the aftermath of the London Unconference, after the usual networking at the pub, I meet Javier Varela, one of our many readers that were present. It turns out my fellow Iberic friend is involved in some interesting hardware projects, one of them being the OVM20 Lite board. I was looking for an excuse to mess around with my old Prusa and this was the perfect one. The P3Steel 3D printer was just getting dusty on my basement and it printed just fine in the past. Until one day… 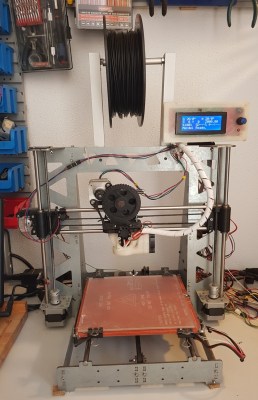 Based on Arduino Mega 2560 with the RAMPS 1.4, it was a pretty standard and cheap option to get some years ago (and still is). My additional modifications or upgrades from the standard options was a LCD screen and the DRV8825 stepper drivers.

What happened was that one fine day the prints started to skew. No matter how hard I tried, it skewed. I checked the driver’s potentiometer, I went back to the motor specifications, I swapped drivers around, and I even flashed another firmware. If the print was big enough, it will get messed up. Sometimes even small prints failed. When you are debugging something like this for hours, there comes a point in time that you start to suspect everything. Was it overheating the drivers? If so, why did this never happened before? Maybe the power supply is fluctuating and coming to the end of its life? Some messed up capacitor in the board? Was it RAMPS’ fault or Arduino? A motor starting to fail? A mechanical issue? I had a fine-tuned Marlin firmware that I manually tweaked and slightly changed, which I had no backup off after the flashing. In retrospect, I actually checked for a lot of things that couldn’t really be related to the problem back then but I also learned quite a lot.

Meanwhile life happened, as it does sometimes, and I didn’t have enough time to get it to work again. It got semi-forgotten, in one of those “I’ll fix it later” shelf’s. I have quite a stack of those by the way and the tendency seems to grow only in one direction. But I always wanted to get the printer fixed, mainly because sometimes when I’m tinkering I go “I’ll just have to print this piece and it would look aweso… oh, wait…”. Or when something breaks around the house my wife says “Can’t you just print that honey?”, which I reply “I could but…”. It was just sad. 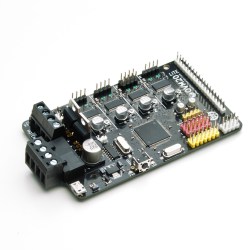 So I meet Javier Varela and learned about the OVM20 Lite board. Made from quality components, this is a sort of an all-in-one Arduino Mega + RAMPS 1.4, 100% Marlin compatible, board. It’s slicker since all of the components are in one four-layer board and already comes with integrated DRV8825 drivers. The obvious downside is that if a driver burns out, it is not easily replaced. The specifications are pretty much what I have at home and I figured that was worth a shot to just replace the electronics I had on my old Prusa for this new board and give it a go. After all, it could actually solve my printing problems and wouldn’t take a lot of time.

I ordered one, the launching price was 39€ for the board, 4 driver dissipaters included, which I find quite fair. The OVM20 Lite board feels similar to the RAMPS and the replacement process was quite easy. I just carefully disconnected a set of cables from my RAMPS and connected to the OVM20. All in all I reckon it took around 15 minutes.

Next step, driver voltage calibration. The drivers potentiometers are not overly sensitive, so they were easier to calibrate than those I had. My preferred method is to plug the multimeter to ground and  use an alligator clip to connect my steel screwdriver to the positive side while turning the potentiometer. One thing I noticed is that the voltage is different when the bed is heating versus resting. I had this on the old board and also in the new one. Maybe some fellow reader can share why this happens and how should the calibration be done, with the bed heating on or off? 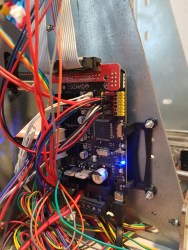 The board comes with Marlin v1.1.1 firmware pre-installed and I saw no need to change it. I had an old laptop that I wanted to put to use exclusively for the 3D printer, so I wiped it out and installed Linux Mint and Repetier. I used to use Slic3r and Printrun to print but since I was changing hardware I also decided to change software as well and see what happens. I never used Repetier before but was not that hard to adapt. I just decided to give it a go without configuring anything just for kicks. Obviously it really wishful thinking to assume it would just print anything that would make sense. It did not. My filament is 3 mm and the default is 1.75 mm, so I ended up with a black plastic blob. What could I expect? It was just a lazy, almost suicidal, move on my part. I changed the filament thickness and give it another go. 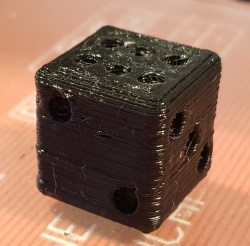 A small 2×2 six-sided die was printed using almost all default settings and turned out pretty good. The nozzle is 0.4 mm and I’m printing in 0.2 mm layers, using PLA filament at 205 ºC and the heatbed at 65 ºC, with cooling. The infill was about 20%, which I find a bit low and sometimes messes up the top layers, as you can see bellow on the HaD logo. It’s really far from perfect and I can finally start my tuning process again but it is printing and it’s not skewing any more. On a side note, some of my PLA filaments are completely brittle and unusable. They weren’t really properly stored. Some of them are ok while others break as soon as I try to put them in the feeder. I’m thinking they have lost too much humidity hence they break easily but I might be wrong. It would be cool to re-moisturize them, but I have no idea if that is possible.

I did a quick sketch on a support for the board, you can find it here. The first version I printed makes the board hang a bit low, the second version, which is online, is a 1 cm higher. It’s slightly better for the USB connector and the cables of my LCD. Then, I printed some more stuff. I haven’t done so for a long time, and it was very rewarding to have my old 3D printer back!

Here’s some of the stuff I printed while writing the article: 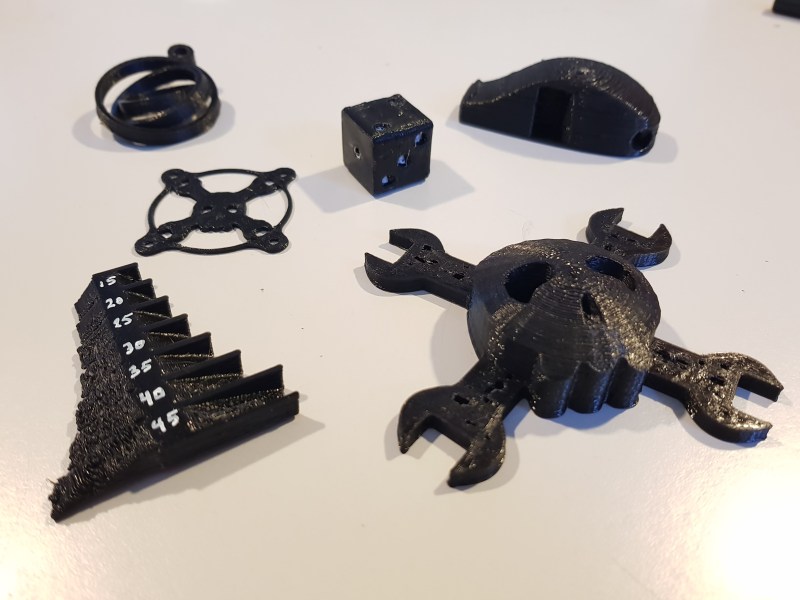 The overhang at the bottom left is upside down to show the calibration that is still needed. The wrenches of the Jolly Wrencher clearly shows that 20% infill is not enough. The first die is there, next to a 40 mm fan protector. Top right is a whistle that looks good but does not work very well.

It’s far from perfection, and I definitely need to tune it better but, hey, it’s a start! What about you? Have you got an old 3D printer in need of some tender loving care?

15 thoughts on “Refurbishing An Old P3Steel”