If your physics knowledge is rusty, think back to recess instead. The swing hangs there on the playground, vertical and still. This is its equilibrium point. When you sit down and start it in motion, you provide the disturbing force. As soon as you hit the peak of your arc, the restoring force of gravity kicks in and your swing moves back through equilibrium to the other end of the sinusoidal period.

A clock pendulum works the same way. And the balance spring and balance wheel in a mechanical watch do too, though it is a bit harder to visualize.

Winding a mechanical watch torques up the main spring and stores the power that drives the gears. This power is meted out by teamwork between the balance spring, wheel, and escapement.

Until now, mechanical watch movements have been made mostly of metal. Because of this, many factors can and do affect their precision. Magnetism, temperature, and even a watch movement’s position throughout the day can all have a detrimental effect on accuracy.

Zenith has tackled all of that in one go by replacing the most sensitive and susceptible components with a single silicon wafer. The new oscillator is a flat, one-piece unit that replaces the balance spring, balance wheel, and escapement lever. If you were to count up all the jewels and bits and bobs that go along with those components, the Caliber ZO 342 replaces about 30 pieces total. 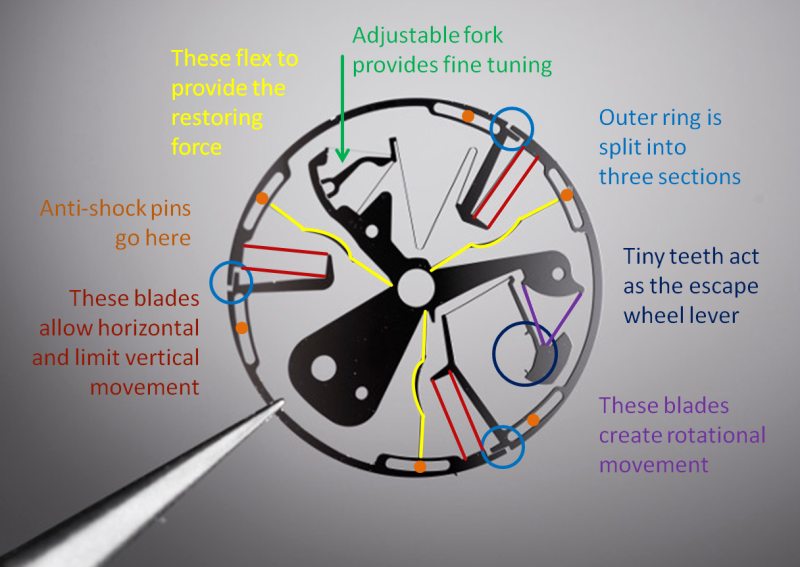 So, how does this abstract, flat-pack oscillator work? Well, the nitty-gritty details are a bit vague. Searching leads to terms like ‘topological oscillation’ and ‘conformational oscillation of (the silicon wafer’s) topology’. It sounds to us like marketing speak for silicon springs.

In the diagram above, there are two tiny teeth circled in dark blue. These teeth ratchet against the escape wheel, providing the disturbing force. There are three whisper-thin blades of silicon highlighted in yellow that act as springs and provide the restorative force.

The shorter pair of blades highlighted in violet create rotational movement to drive the gears. The red blades link together the three lobes of the oscillator. These blades allow for horizontal movement while limiting vertical movement, or amplitude.

The Caliber ZO 342 made its debut a few weeks ago in a new watch called the Zenith Defy Lab. As if a new kind of oscillator weren’t enough, the Defy Lab’s case is made of a new composite material called Aeronith. Up close, Aeronith kind of resembles old, silvery, pockmarked asphalt. That’s because it is made of open-pore aluminium foam stuffed with a light polymer. This process produces a material that’s lighter than carbon fiber.

Surprisingly enough, the watch starts at a “mere” $30,000. Still not reaching for your wallet? All ten that were made have already been spoken for, anyway. There’s no charge to drool over Zenith’s horologically pornographic teaser video for the Defy Lab after the break.