If you ever thought about becoming a treasure hunter this simple DIY metal detector by [mircemk] may be a nice project to start with. 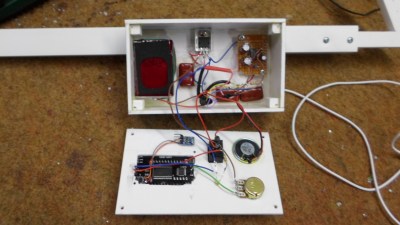 The design is based on an opensource metal detector called Smart Hunter. This Very Low Frequency (VLF) metal detector uses transmitter and receiver coils in so-called Double-D geometry. The transmitter coil is driven by a signal generator module that operates at its resonant frequency of 4.74 kHz.

The resulting oscillating magnetic field will induce eddy currents in a nearby metal object that in turn induce a signal in the receiver coil. This signal is then fed into the microphone port of a smartphone and analyzed by a custom metal detector app. [mircemk] also included an audio amplifier and small speaker into the device.

The detector turned out to be quite sensitive and can detect a coin at up to 25 cm distance and larger metal objects even up to 1 m. Modern metal detectors can also distinguish between different types of metal by analyzing the phase shift of the detected signal which might be some way to improve the design.