For years [Centas] dream was to take the stars to his home and build a fiber optic ceiling. Even though there are many fiber optic star ceiling kits commercially available, we are glad he decided to go full DIY on this project as the result is simply astonishing.

[Centas] chose to make a model of a section of the sky as it is visible from his home and generated a map of 1,200 stars with the planetarium software Celestia. The most time-consuming part of making a star ceiling is always poking lots of holes for the fibers. In [Cenas] case this turned out to be especially cumbersome as he decided to install the fibers after hanging the ceiling panel so he came up with a method to catch the fiber with a fishing pole after pushing it through from the bottom. The finished ceiling looks really great though with its rounded edges that contain RGB LED strips for side illumination. [Cenas] also painted the ceiling after installing the fibers so they are not visible when they are not lit but there is still enough light shining through the paint. 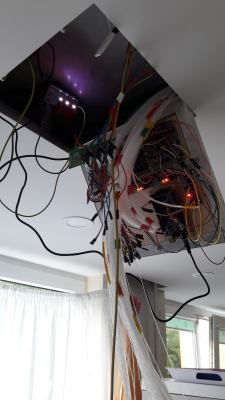 The electronics were divided into two parts, a transmitter installed in a laser-cut box and a receiver part mounted directly in the ceiling. The transmitter contains an MSGEQ7 graphic equalizer chip and an audio jack to make the ceiling sound reactive.

The control scheme is somewhat unusual as the transmitter receives signals from an IR remote and then forwards them to the receiver via an NRF24L01 2.4 GHz module. The receiver module adjusts the LEDs brightness via PCA9685 PWM controllers connected to some transistors and MOSFETs. The circuit actually caused some problems as LEDs started flickering at low PWM values. Apparently, this was caused by the low switching times of the MOSFETs, so [Cenas] solved it by lowering the PWM frequency.

In the video below it looks like [Cenas] also installed some illumination that can draw lines between the star constellations but in the comments he reveals that it was just done by video editing. It would be nice though to see someone building such an illumination using LED strips or side-emitting fibers.

Interestingly, other people have found ways to make similar installations by directly poking fibers through the ceiling from the room above.

3 thoughts on “Fiber Optic Ceiling Pumps To The Beat”