Monitoring environmental sounds is perhaps not a common task, but much like with wildlife cameras, we could learn a lot from an always-on device listening in on Mother Nature. The AudioMoth is one of such devices. Although it has been around for a few years, it is notable for being an open platform, with the full Eagle-based hardware design files, BOM and firmware available, as well as NodeJS- and Electron-based utility software.

The AudioMoth is powered by a Silicon Labs EFM32-based MCU (EFM32WG980F256) with a Cortex-M4 core, 256 kB of Flash and 32 kB of SRAM. Using the onboard MEMS microphone it records both audible and ultrasonic frequencies that are written in uncompressed WAV format to the SD card. This makes it capable of capturing the sounds from bats in an area in addition to the calls of birds and other wildlife. 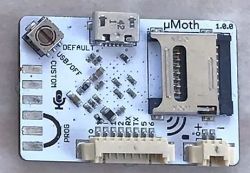 The AudioMoth has also a micro-sized, low-cost version called the μMoth, which shares the same features as the AudioMoth. This project is still in progress, with updates expected later this year.

Although the AudioMoth device can apparently be bought from sites like LabMaker for $74 at this point, it should be noted that the MCU used on the device is listed as ‘NRND’ (not recommended for new designs) by SiLabs, which may complicate building one in a number of years from now. Or at least you’ll have to substitute in a different microcontroller.

Regardless, it does seem like an interesting starting point for wildlife monitoring, whether one simply wants to build a device like this, or to use it as inspiration for one’s own design.

12 thoughts on “AudioMoth: The Proverbial Moth On The Wall”