Fishing is generally thought of as a relaxing and laid-back activity, but it still requires a certain amount of physical strength and dexterity. This can be a problem for older anglers or those with physical disabilities. To bring back the simple joy of fishing to those who may no longer be able to hold a rod on their own, [Ozz] has been working on the FISHBOT.

The FISHBOT looks like a miniature crane, complete with an electric motor and winch to pull in the line. But there’s a bit more going on here than meets the eye. Anyone who’s tried to land a large fish knows you have to be cautious of snapping the line, so [Ozz] has added a load cell to the system that can tell when its being pulled too tightly. In the future he hopes to make this feature a bit smarter by taking into account additional variables, but for now it should at least keep the more energetic of your quarry from getting away. 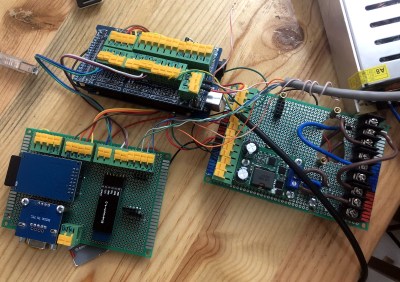 [Ozz] is controlling the beefy 400 watt motor with an IBT-2 H-bridge module connected to an Arduino Mega. The electronics can communicate with the user’s smartphone over a HM-10 Bluetooth module, which allows for more advanced features such as gesture controls that utilize the accelerometer in the phone. Long term, it sounds like he hopes to use the microcontroller in conjunction with the load cell to pull off more advanced tricks like weighing the fish and sending the data off to the user’s fishing buddies to show off.

In the past we’ve seen a drone used to get a lure out where the fish are, but catching one and reeling it back in is a very different challenge. It looks like [Ozz] still has some work to do on this project, but so far it seems things are going well. Being able to return a simple pleasure like this to those who thought their fishing days were behind them will surely prove worthy of the effort.