Back before the industry agreed on the now ubiquitous clamshell form factor of portable computers, there were a class of not-quite-desktop computers that the community affectionately refers to as “luggable” PCs. These machines, from companies like Kaypro and Osborne, were only portable in the sense that their integrated design made it relatively easy to move them. Things we take for granted today, like the ability to run on battery power or being light enough to actually place in your lap, wouldn’t come until later.

For a contemporary take on this decades old concept, take a look at this fantastic build by [Ragnar84]. It packs a modern desktop computer and a 15.6 inch laptop display into a custom designed case, but like so many other projects, the devil is truly in the details for this one. Little touches such as the kickstand on the bottom, the removable handle on the top, and the right angle adapter that takes the HDMI output from the GeForce GTX 1060 video card and redirects it back into the case really add up to create a surprisingly practical computer that’s more than the sum of its parts. 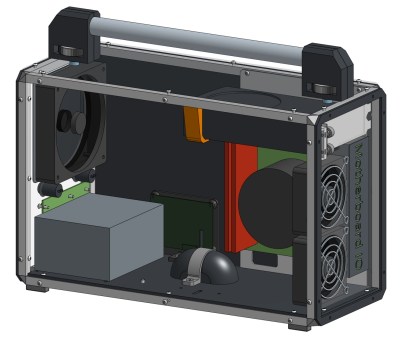 While the case might look like your standard gamer fare, [Ragnar84] built the whole thing out of miniature T-Slot extrusion and custom-cut aluminum and acrylic panels. But not before modelling the whole thing in 3D to make sure all of his selected components would fit. For the most part the internals aren’t unlike a standard Mini-ITX build, though he did need to make a few special additions like a shelf to mount the driver board for the N156H LCD panel, and a clever clamp to hold down the rounded USB speakers.

We’ve seen some impressive recreations of the classic luggable in the past, but those have usually been powered by the Raspberry Pi and leaned heavily into the retrofuturism that’s a hallmark of the nascent cyberdeck movement. In contrast [Ragnar84] has put together something that looks perfectly usable, and dare we say it, maybe even practical.

25 thoughts on “A Modern Take On The “Luggable” Computer”