Today, computers are separated into basically two categories: desktops and laptops. But back in the early 1980s, when this ideological line in the sand was still a bit blurry, consumer’s had a third choice. Known as “portable computers” at the time, and often lovingly referred to as luggables by modern collectors, these machines were technically small enough to take with you on a plane or in the car.

Improvements in miniaturization ultimately made the portable computer obsolete, but that doesn’t mean some people still don’t want one. [Dave Estes] has been working on his own modern take on idea that he calls Reviiser, and so far it looks like it checks off all the boxes. With the addition of a rather hefty battery pack, it even manages to be more practical than the vintage beasts that inspired it. 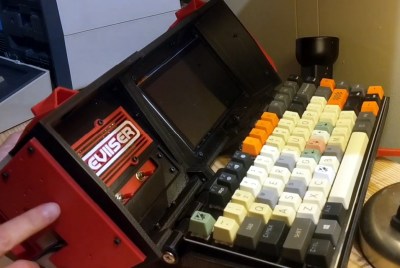 In the video after the break, [Dave] walks us through some of the highlights of his luggable build, such as the fold-down mechanical keyboard, gloriously clunky mechanical power switches, and the integrated touch screen. We also really like the side-mounted touch pad, which actually looks perfectly usable given the largely keyboard driven software environment [Dave] has going on the internal Raspberry Pi 4. With a removable 30,000 mAh battery pack slotted into the back of the machine, he’ll have plenty of juice for his faux-retro adventures.

[Dave] mentions that eventually he’s looking to add support for “cartridges” which will allow the user to easily slot in new hardware that connects to the Pi’s GPIO pins. This would allow for a lot of interesting expansion possibilities, and fits in perfectly with the Reviiser’s vintage aesthetic. It would also go a long way towards justifying the considerable bulk of the machine; perhaps even ushering in a revival of sorts for the luggable computer thanks to hardware hackers who want a mobile workstation with all the bells and whistles.

Right now there isn’t a lot of detail on how you can build your own Reviiser, but [Dave] says more info will be added to his site soon. In the meantime, you can check out some of the similar projects we’ve seen recently to get some inspiration for your own Luggable Pi.

25 thoughts on “A Luggable Computer For The Raspberry Pi Era”