When [tdw] wasn’t feeling well one day, his wife suggested that it might be due to poor air quality in their home. While an ordinary person could have simply opened a window after hearing such an idea, [tdw] instead showed his true hacker spirit and set about measuring the indoor air quality. He began by designing a simple PCB to measure CO2 and volatile organic compound (VOC) levels, but eventually broadened his scope to end up with the Sensor Playground: a plug-and-play platform to read out various sensors and store the results in the cloud. 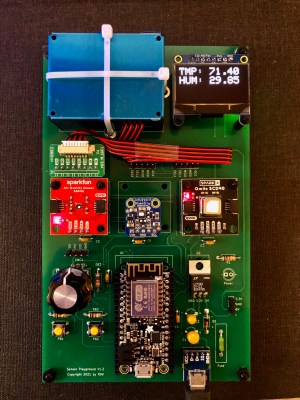 Deliberately designed to be easy to assemble with minimal soldering skills, the Sensor Playground consists of a big two-layer PCB onto which various modules can be plugged. It supports either an ESP32 DevKit or an Adafruit Feather module to provide processing power, and provides sockets for a bunch of sensors, conveniently wired with power and SPI or I2C. It also provides a rotary encoder and two buttons for user input. All source files are available on [tdw]’s GitHub page, ready to be applied to any kind of sensing task.

[tdw] set up his Sensor Playground with sensors measuring CO2, VOC, PM2.5 (particulate matter), as well as temperature and relative humidity. A web interface allows anyone to track these measurements in real-time. The open and modular design should make it easy to extend this system with various other sensor types: we can imagine that things like solar irradiation, outside temperature and wind speed would also add useful data to the mix. Perhaps even a Geiger counter to keep track of radiation levels?