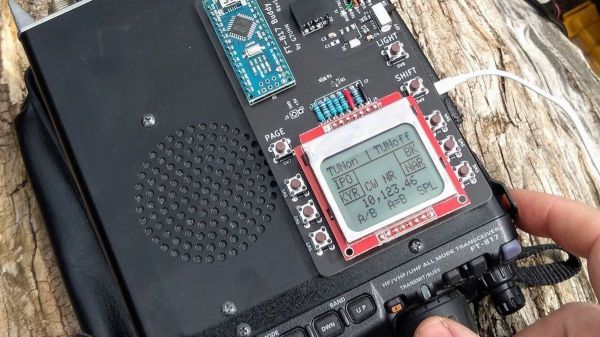 As popular as the venerable Yaesu FT-817 transceiver might be with amateur radio operators, it’s not without its flaws, particularly in the user interface department. [Andy (G7UHN)] is painfully familiar with these flaws, so he designed this auxiliary display and control panel for the FT-817 to make operating it a little easier.

There are a ton of ways to enjoy ham radio, but one of the more popular ways is to bust out of the shack and operate in the great outdoors. From the seashore to mountain peaks, hams love giving their rigs some fresh air and sunshine. The battery-powered, multimode, all-band FT-817 is great for these jaunts, but to fit as much radio into a small package as they did, Yaesu engineers had to compromise on the controls. Rather than bristling with buttons, many of the most-used features of the radio are buried within menus that require multiple clicks and twists to access.

[Andy]’s solution is a PCB bearing an Arduino Nano, an LCD screen, and a whole bunch of actual buttons. The board sits on top of the case and talks to the radio over a 8-pin mini-DIN cable using both documented and undocumented  CAT, or Computer Aided Transceiver commands. The LCD displays the current status of various features and the buttons provide easy access to changing them, essentially by sending keystrokes to the radio.

Hats off to [Andy] for tackling this project. The only other FT-817 hack we’ve seen before was useful but far simpler, and didn’t require KiCad, which [Andy] had to teach himself for this one.