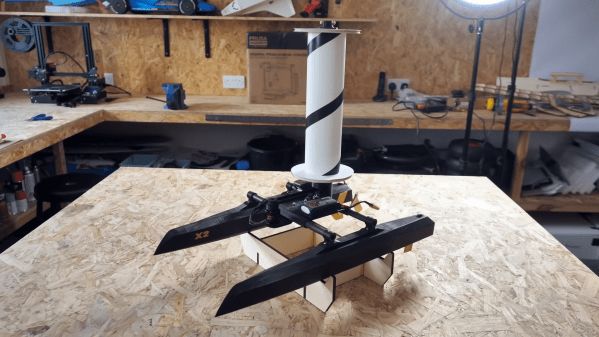 The Magnus effect is a interesting and useful phenomena. [James Whomsley] from [Project Air] decided to put it to work on a small radio-controlled boat, successfully harnessing the effect. (Video, embedded after the break.)

The Magnus effect is an interesting thing, where fluid flowing over a rotating object generates an aerodynamic force at a right angle to the direction of the flow and the axis of rotation. (It’s why curveballs curve.) This can be used for propulsion on a boat, by spinning a tall cylinder called a Flettner rotor. This takes advantage of Magnus effect to generate thrust.

The boat uses a 3D-printed hull, sealed up with a leak sealer spray and lots of spray paint to avoid leaks.  In the center of the catamaran design, there’s a spinning rotor belt-driven by a brushless motor. Outside of the rotor for thrust, a simple rudder is used for steering.

With the rotor turning, the boat was able to successfully sail along with the benefit of the thrust generated from the wind. However, there were teething issues, with heavy winds quickly capsizing the boat. [James] realized that adding some proper keels would help avoid the boat tipping over.

We’ve seen [James] around these parts before, namely with the Magnus-effect aircraft that preceded this build.